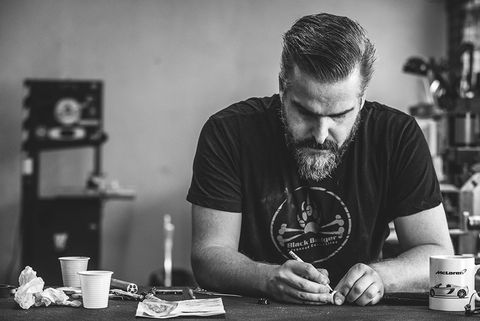 Welcome to Adventures in Luminova, a three-part series of stories exploring the wild and wonderful world of luminous materials in watchmaking

In Part 2: Fruits of the Lume, we showcase some of the most exciting luminous designs and technologies around right now

It's time, as they say, for the science bit. We've looked at some of the coolest, brightest and boldest luminous watch designs, and talked about how brands are embracing their inner sense of playfulness when it comes to using luminous materials. Now we're going to dig a bit deeper into what makes all this funky bright decoration actually work.

First, though, a little background. What are luminous materials actually made of, and where did they come from?

As a general rule, to make something glow in the dark, you coat it with a luminescent pigment. That’s the way it has been since the ancient Chinese and Japanese discovered luminescence, using crushed jade or seashells to make paints.

Chemically, naturally-occurring lume like this is made from metal sulphides – usually zinc sulphide – which, combined with impurities such as copper, exhibit luminescent properties. In the seventeenth century, Italian artists used “the Stone of Bologna”, a naturally occurring luminous rock that turned out to be barium sulphide, and in the nineteenth century, the combination of zinc sulphide and copper was used to make cheap, novelty glowing paints.

It was the study of phosphorescent materials in the late 1800s that led to the discovery of radioactivity by Henri Becquerel in 1896. Two years later Marie and Pierre Curie isolated radium, which was named in 1899 specifically for its property of emitting rays of energy.

It wasn’t long before the bright idea of adding new exciting radium to trusty old zinc sulphide came up. In the early 1900s, electrical engineer William Hammer was first to use a radium paint on instrument and watch dials, having received radium samples from the Curies. He failed to patent the idea, however; that opportunity fell to Tiffany mineralogist George Kunz and chemist Charles Baskerville.

Paints based on the active ingredients of zinc sulphide and radium-226 are what adorned the dials of early luminous watches, most obviously the Panerai Radiomir. When the use of radium on watch dials was finally banned in 1968 (forty years after the infamous court case of the "Radium girls”) watch companies moved to tritium, hence the “T” at the base of watch dials from the late 60s onwards. (You can read a comprehensive history of lume on Rolex Submariners here).

Antiquorum - Rolex Submariner ref. 5513 from 1972 showing "T" for Tritium lume at base of the dial
Antiquorum

Tritium-based paints – still based on zinc sulphide – were the norm until the early 1990s when Japanese firm Nemoto invented Luminova (later upgraded and re-branded as Super-Luminova). This, Lumibrite, Chromalight and other modern luminous pigments are all based on the same active chemical ingredients: strontium aluminate doped with europium or dysprosium ions.

This is also the case for Moonglow, the first of James Thompson’s luminous materials. As he explains, however, things have now moved on:

“Earlier pieces of mine, and the Schofield Blacklamp watch used a lume material called Moonglow. Moonglow is a Strontium Aluminate active ingredient suspended in an acrylic substrate; essentially a solid plate of plastic with glow agent in it.

“Over the last few years, and with the Sarpaneva / Black Badger Northern Lights collaboration I've been working with a next-generation proprietary lume composite that, in my opinion, is the best on the market.”

Thompson is understandably reluctant to reveal the nature of this new material; it’s fair enough as with the exploding popularity of lume, he is concerned with protecting his competitive edge. All we can say is it is based on the work of Canadian firm AGT (which stands for Ambient Glow Technologies), whose projects include glow-in-the-dark concrete surfaces to make it easier to navigate dark areas at night.

As Thompson explains, this gives him a lot more creative flexibility than layers of paint:

“I'm able to develop much thicker pieces of the material, in comparison to earlier materials that were only available a few millimeters thick. This allows for solid forms to be milled directly from the material. So instead of a painted-on layer we are quite literally able to sculpt with light.”

“This was the case with the Northern Lights pieces, as the dial itself was milled directly from the lume material. This was a very unique example in the industry of the illumination system being a structural part of the watch. Stepan Sarpaneva and I were able to achieve amazing illumination despite the lume aspect of the dial being roughly half a millimetre in thickness.

How does lume work?

This is the real science bit so we’ll try to keep it brief. All the luminous materials listed above are photoluminescent; they become luminescent when they absorb photons, i.e. light. Specifically, they are phosphorescent – (the name is a misnomer, because phosphorus, which does glow and gave rise to the word, is not phosphorescent, it’s chemiluminescent) which means they release their absorbed energy slowly over time.

Why? It’s to do with quantum states. Electrons get excited by the photons, raising them into a different quantum state (normally, they’re in something called a “ground state”, which is basically stuff just resting, going about its business). Phosphorescent compounds are unusual in that when this happens, the electrons don’t just bounce back down immediately, but remain in the excited state (also called a triplet state) for up to several hours. Light energy is emitted as the electrons slowly return to normal, relieving themselves of the energy they initially absorbed as they go. This is manifested to us in the form of a nice, pretty glow.

Why is some lume brighter than others?

This is a complex one. You can chemically tinker with your strontium aluminate mixture to be more potent – which is what Rolex has done with Chromalight – but there are several other reasons why some lume seems brighter than others.

Colour plays a big part, but so does the quality of the light absorbed, and your perception of the watch when you look at it. As James Thompson says of his MB&F and Sarpaneva pieces, “Currently there are four colours of the material: Phantom Blue, Radar Green, Aqua, and Purple Reign. The material charges from any bright light source, to glow in darkness for an extended period. How bright and how long depends on the strength of the charging light and the darkness of the viewing area.”

“The Purple Reign is unique among the colors as it only reacts to UV light. The UV component of sunlight is a perfect charging source, but it's not as "easy" as the other colors. You have to earn its love, a bit like a cat.” Put another way, the purple compound requires more energy to excite; the shorter wavelength of UV light carries the most energy, so it’s more effective at moving those electrons up into their excited state.

If we’re talking Super-Luminova, the way the paint was applied can make a big difference. A thicker layer of lume will be brighter than a thin one of equal area, but also a wide line will appear brighter than a narrow one, even if the paint is of equal thickness – an optical trick played by our eyes. Luminova paints are also available with different particle sizes – the bigger the particles, the brighter it’ll be. You also need to make sure the lume has had enough time to charge up.

Does lume decay over time?

It does. You may not notice it – partly due to the variety of factors involved in its perception, above – but according to Nemoto & Co, after a minimum of 1,000 hours of maximum absorbance, Luminova’s brightness will degrade by approximately 20%.

What does the future hold?

As James Thompson says, the future of working with solid lume compounds is – hopefully – more interesting shapes and designs. Think hour markers and date wheels milled out of solid lume, as well as more decorative experiments. One thing that won’t be commonplace any time soon, however, is vastly different colours. “The colours we use are all in the green - blue end of the spectrum. The whole yellow/orange/red end of the spectrum isn't any good for photoluminescents. Sorry, no red Darth Vader editions yet!”