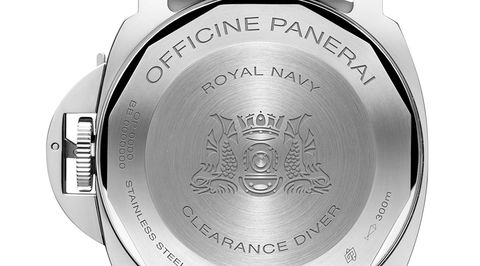 With our deck shoes on and a fair wind behind us Team QP joined Panerai on the British leg of its Classic Yachts Challenge as it weighed anchor in Cowes last week. Panerai also invited Leader Divers Richard Hughes and Graham Williamson, experienced Royal Navy Mine Clearance Divers who wore a brace of under-the-radar Panerais.

A quick glance on the wrist and you’d be forgiven for assuming the watches were stock PAM 00024 Submersibles, but turn them over and the engraved casebacks reveal them to be limited editions exclusively created for and solely available to serving members of the Royal Navy’s Clearance Branch.

Two things about this are significant; firstly the watch has been issued its own PAM number - the PAM00664 - which is perhaps unexpected given the watch’s exclusive, borderline secretive nature, but most importantly this is the first time that Panerai has worked with a military unit to produce an exclusive watch, which is pretty extraordinary considering Panerai’s origins in producing first nautical instruments and later watches for the Italian Navy.

With military contracts making up a very substantial chunk of revenue for brands such as Bremont and Christopher Ward, Panerai would appear to be missing a very profitable trick, especially considering the brand’s storied military history.

Marketing departments across the watch industry love a good origin story; it gives them a convincing script from which to talk to us in the watch press. But the PAM 00664 offers nothing more exotic or dinner party-worthy than Hughes himself making a direct approach by email through Panerai’s website.

Hughes told QP: “After a short exchange, myself and the head of Panerai UK, Philippe de Saint Lager, met and discussed in further detail. Panerai seemed to be really excited about the whole prospect of making this bespoke piece; however both parties proceeded with caution as we both wanted to do this right. Once the whole idea got approved from the highest level within Panerai, the whole process was a quick, easy and exciting project.”

While Panerai's dive watches regularly hark back to the WWII teams of torpedo crews that proved so devastating against Allied naval forces, there is no hint of awkwardness in a modern partnership with the Royal Navy. For one thing, there has always been great respect between military divers for the risks involved; not least in the early days of the 1940s.

A run of 50 watches might be relatively small beer in the grand scheme of Panerai's output, but Hughes was understandably concerned about what the demand might be amongst his colleagues. He shouldn’t have worried as nearly double that number of his fellow divers declared an interest within two days of the watch being announced.

“It was done on a strictly first-come, first-served basis,” added Hughes. “The only stipulation being that you had to be a serving member within the Clearance Diving branch to be an owner. There were plenty of requests to extend the edition, however we all felt 50 was a perfect number and those lucky 50 have such an exclusive and valued watch to their name.”

In today’s market when a watch is marketed with even a sniff of heritage or history it lives or dies by the authenticity of those claims. There can be few who would object to Panerai producing dive watches for the military when this is the result.

While it is Panerai’s first entry into the healthy market for UK military exclusives it is not, however, the Royal Navy Mine Clearance Divers’ first exclusive watch. It would seem that the unit has a bit of a penchant for custom watches – especially those that excel under water - and their portfolio of commissioned exclusives already includes a number of desirable tool watches.

Nick and Giles English are clearly such fans of the Clearance Divers’ daring exploits that Bremont is in the process of creating its second exclusive watch for the unit. The first was the black PVD-treated steel Supermarine S500 RNCD with 100 pieces being produced at the request of the unit.

Bremont is now taking orders for the Bremont RNCDII, an altogether slicker titanium effort with a very familiar orange GMT hand. Bremont is currently accepting deposits with a final balance of £2,650 because the watch is sold directly to carefully vetted serving military personnel rather than through the usual retail channels.

Omega too produced a 150-piece exclusive run of its Seamaster Professional in 2010 with electric blue dial and printed crest on the reverse under a sapphire crystal and unique 2257.80.00 reference number.

But top of the pile must surely be the run of 50 Rolex Deepsea Sea-Dweller watches commissioned from Rolex in 2013 to celebrate the 60th Anniversary of the unit’s formation.

The watches appear to be stock Deepsea Sea-Dweller watches except for the exquisitely detailed and reflective 3D relief of the Clearance Diver crest stamped onto the caseback - which must feature among the most beautiful casebacks of all time.

Given the incredibly exclusive numbers and the fact that they were only ever sold to serving members of the unit, these watches have accumulated significant value in a matter of years. Last May, 042 of 050 sold at Christie’s Important Watches sale in Geneva for CHF 42,500 (£32,600), not bad for a watch that normally retails for £8,050.

So it would seem that Panerai is in good company.