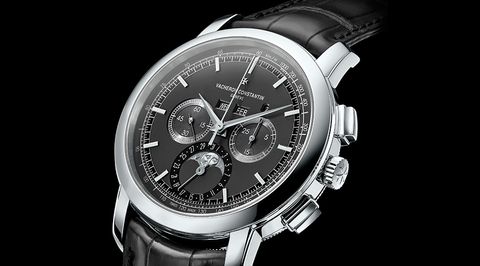 The watch you see above is the new Vacheron Constantin Traditionelle Perpetual Calendar Chronograph. Vacheron's Perpetual Chrono is a longstanding pillar of the Traditionelle line, and it's one of those watches which reinforces the brand's status as one of the Big Three of Swiss watchmaking.

It has had a bit of an aesthetic update from Vacheron - bringing it a new slate grey dial and platinum case - but the main changes are under the bonnet, where we find Calibre 1142 QP.

Herein lies a tale. Historically, Vacheron Constantin, along with many others including Patek Philippe, used variations of the Lemania calibre 27-70 as the chronograph base for its perpetual calendar chronograph. Patek switched to a fully-in house movement when it released the 5270, in 2011. Lemania, as we know, has been owned by Breguet for some time now.

Vacheron Constantin used to use Calibre 1141, which was its internal designation for what was effectively a Lemania 27-70, re-made to Vacheron's own standards. The upgrade to 1142 brings a couple of notable changes - an increase from 2.5Hz to 3Hz frequency, and a slight decrease in thickness being the most notable.

Here's where things get a little complicated. We've seen this new movement simultaneously praised elsewhere on the internet for being Lemania-based, and therefore true to a certain purity that's prized by collectors, and praised on other sites for being Vacheron's first "in-house" perpetual calendar chronograph movement.

This is just one of many ways into the thorny issue of what "in-house" really means, and we're not opening the can of worms today - at least, not all the way. Just having a peek inside. According to Vacheron Constantin, it "partnered with Breguet in order to rebuild and manufacture the caliber in keeping with the Maison’s highest quality standards and the criteria of the Hallmark of Geneva." That makes sense - Poincon de Geneve certification requires every part to get a certain degree of attention - but does it make it an in-house movement?

Vacheron elaborated for us, explaining that the entire movement is manufactured in-house from scratch, including the escapement. No ebauches, kits, components or, well, anything, comes in from Breguet any more. Furthermore, Vacheron claims to have redesigned and improved a significant number of components throughout the movement. The basic design may be recognisable from the old Lemania calibres, and the specification may be similar to Breguet's current 2320/533.1. But this is the watchmaking equivalent of "my grandfather's axe" - if you change the handle, the blade and the fastening of the axe over time, is it still the same axe?

Maybe the best way to think about it is to say that, actually, you can have it whichever way you want. If it matters to you that your perpetual calendar chronograph maintains a lineage from one of the all-time great chronograph calibers, then you can play up the Lemania link. If you value the idea of all-under-one roof manufacturing, elevated to Geneva Seal levels, then you can think of it in those terms. You're not wrong either way - possibly you're ignoring part of the story, but so be it. In any case, you shouldn't be disappointed with the watch. It's a fitting display of pure, classical watchmaking that has few peers.

The Vacheron Constantin Traditionelle Perpetual Calendar Chronograph reference 5000T measures 43mm across, is cased in 950 platinum, and rated to withstand 30m of water pressure. It uses calibre 1142 QP, a hand-wound chronograph calibre beating at 3Hz, comprising 324 components with a 48-hour power reserve. In the UK, it will cost you £127,950.

We thought this would be a good opportunity to remind ourselves of the other perpetual calendar chronographs out there. It’s not often you can run through literally every single instance of a complication, but such is the rarity of this combination that we thought, why not. A lot of the world’s top tier brands don’t offer a perpetual chrono – there's nothing from Jaeger-LeCoultre, Cartier or Breguet here, for example. That shows the level we are at.

Taking what is quite possibly the most loved high-end chronograph out there right now and grafting on a perpetual calendar was no cinch, but Lange doesn’t do things by halves. Hence it also now packs a tourbillon. The movement required serious re-organisation to accommodate all 800-odd parts, and by now it really should go without saying that every micron of it, front and back, looks sensational. One for the history books, this.

Our first example from one of the other Big Three Swiss manufactures is a bit of an odd one out (although not quite, as we will see). Yep, it’s a Grand Complication. So it ticks the boxes for this list, and then some, bringing a minute repeater to the table for good measure. AP doesn’t make a watch with “just” perpetual calendar and chronograph functions, so this will have to do. Unusually for a Grand Comp it's cased in titanium (the better to hear the chiming, one imagines).

Old-guard horology from Blancpain - we don't find ourselves talking about the Le Brassus collection very much these days, but there are some very heavyweight references on the books. None more so than this perpetual calendar chrono, which is the only one in this list (and therefore, the only one full stop) which combines the perpetual calendar with a flyback split-seconds chronograph. Dial design has moved on somewhat since this watch was young - it has been around more than a decade unchanged - suffice to say the addition of a moonphase makes for a very busy layout.

EDIT - this watch, we learn, is no longer being produced, but can be found in boutiques

The newest member of the club, Chopard marked its 20th year of LUC fine watchmaking with this handsome piece. In true Chopard style, it’s elegant, but not wispy or delicate - at 45mm, it's one of the largest on this list. It’s a confident watch; we covered it here when it was released, and a little time hence we can say its “Mickey Mouse” registers, copious used of red and chunky Roman numerals are definitely growing on us. It's a flyback chronograph and you get a relatively rare circular moonphase display at 6 o'clock.

IWC made a little piece of history in 1985 when it released the Da Vinci, the first perpetual calendar chronograph that could be adjusted entirely from the crown. It was the watch that put IWC on the map in haute horlogerie terms, and although the Da Vinci range has been left on the shelf recently in favour of more saleable prospects, the calibre 89801 appears in both Portugieser and Pilot’s Watch guises as well, most recently appearing as the Digital Date-Month Spitfire. It's a flyback chronograph, too.

IWC also makes the Portugieser Grande Complication, of course, which adds a minute repeater and moonphase, and does away with the flyback function - that's Calibre 79091.

Of course – of course­ – it is Patek Philippe with three separate movements that combine a chronograph with a perpetual calendar. Having just one wouldn’t be trying, would it? It has been making them since 1941, after all.

First up we have the 5204. This is actually a split-seconds chronograph as well as a perpetual calendar – a specific combination that no-one else can offer, although as we've seen, the Blancpain can go one better with the addition of a flyback. New for 2016 is a white-dial rose gold version, but if it was QP’s money, we’d be going home with the black dial platinum model.

Next, we have the 5208. This, like the Jules Audemars, is a Grand Complication in the purest sense (combining calendar, chronograph and chiming functions, something not all Grand Comps actually do). Just to really hammer the point home, it’s actually a monopusher chronograph, and only available in platinum.

Have we saved the best until last? It’s hard to argue. Reference 5270 is the simplest of these three Pateks (really quite a relative use of “simple”, there), and although run close by the 5204, also the best looking. If you were sending an example of fine watchmaking to a far-flung civilisation and could only choose one watch to exemplify all that that stands for, you could do a lot worse. Introduced in 2011, it was the first Patek perpetual calendar chrono to use an entirely in-house movement, and it stands on the shoulders of such giants as the 1518 and 2499.