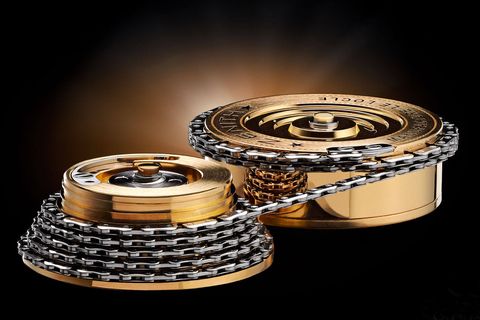 Everything in life runs better when it's constant. Daily activities are completed with ease if things in our lives remain steady, as jerky or erratic changes tend to disrupt our flow. The expression 'runs like a Swiss watch' is a common one, and as lovers of all things horological, you readers will be intimately familiar why.

A mechanical watch is just like life, it runs more accurately, and with greater ease and accuracy, when things remain constant; precisely when the force flowing to the balance remains stable.

If the flow of force from the mainspring through the escapement to the balance (via the gear train) is even and consistent, the watch will be more accurate and reliable as changes in power can cause the balance to vibrate at different rates. But what obstacles prevent the force from being constant, and what is done to ensure that it will stay constant? The answer is a constant force mechanism.

What are constant force mechanisms? How do they work, and who is using them today?

The Search For A Constant

When wound to maximum capacity, the force delivered from the mainspring is at its highest, and when fully wound, the spring is coiled tightly around a central arbor. As the mainspring unwinds, the force that it is capable of delivering becomes less. This phenomenon is known as Hooke's law, which states that the force is proportionate to the extension of the spring.

Early pocket watches used coiled, carbon steel springs as their primary source of power. Those pocket watches of the sixteenth and seventeenth centuries used an elementary form of escapement known as the verge escapement. This particular style of escapement was profoundly affected by the force delivered by the spring, as it is a frictional rest escapement, meaning the escape wheel is in constant contact which doesn’t allow the balance to swing freely, which had a detrimental result on their accuracy. The Verge escapement caused the gear train to turn backwards during recoil, meaning the pinions were driving the wheels, which also affected the accuracy.

The introduction of the cylinder escapement in the eighteenth-century meant that variations in accuracy were less than the verge escapement, as the gear train wasn’t forced to turn backwards. It was still affected, however, as the cylinder was also a frictional rest escapement.. The lever escapement, invented in 1754, helped reduce the impact of the uneven force even further as this was a detached escapement, meaning the balance was free to swing without constant contact with the escape wheel.

The most common ways of achieving this stability of power were the chain and fusee, as well as Geneva stop-work.

The mainspring, housed inside the barrel drum, has a cut out on the outer wall allowing for a link chain with a hooked end to be attached. Connected to the other end of that chain is the fusee (a cone-shaped wheel, which drives the gear train, with its widest diameter at the base gradually becoming narrower toward the top). When the watch has no power applied to the mainspring, the barrel drum has the chain wrapped around it. As the key was turned (to wind the spring inside the barrel), the link chain would slowly wind around the fusee as the mainspring coiled tighter around the central arbor.

Another method to help even the flow of force was Geneva stop work, also known as Maltese stop work. It is similar to a chain fusee in the sense that it also regulates the flow of force to the balance. It’s comprised of a finger, which sits on the barrel arbor, and a star wheel. As winding and unwinding of the mainspring take place, the finger comes into contact with the star wheel which allows the barrel arbor to turn no further. It stops the mainspring reaching its maximum wind, roughly a full turn. It also prevents the mainspring from releasing all its energy before the watch stops. The purpose of this is to ensure that the mainspring is not being used at its outer and innermost coils and allows the power flow to be more consistent, ensuring the power loss will be less after 24-hours.

While these techniques helped control the flow of force, they didn't keep the force completely constant.

Supplying a constant force is the only true way to provide force to the balance evenly. The systems previously spoke about do much to help, but constant force mechanisms do the best job. A remontoire is the most common example that we see today.

Gronefeld is one notable watchmaker to have recently added a remontoire to its range, with the 1941 Remontoire
Gronefeld

The remontoire is frightfully expensive to manufacture, and we see only a handful of makers today willing to undertake the endeavour. Most notable, Francois Paul-Journe. The F.P Journe Chronometre Optimum, below, and Tourbillon Souverain are both impressive examples that use a constant force mechanism.

IWC are the latest players to the constant force game in the form of the Big Pilot's Watch Constant-Force Tourbillon edition "Le Petit Prince" (quite a mouthful). The A. Lange & Sohne Richard Lange Perpetual Calendar is another example in production today.

If the force delivered to the balance needs to be consistent, why aren't more makers putting these types of mechanisms into production? First, the remontoire is costly to make and is usually only seen in watches with multiple complications, such as the examples above.

The second reason has to do with modern alloy mainsprings used in watches today. The coiled carbon steel mainsprings used when verge and cylinder escapements were commonplace are long gone. New mainsprings manufactured from a steel alloy are much more consistent in their force output by design. When relaxed, the spring appears to look like a reverse 'S' shape. They feature more excellent elasticity than carbon steel varieties. The reverse 'S' shape helps to increase the power from the outer half of the mainspring by winding it through a greater angle than the inner half, which helps to smooth out the force output. Combine this with the fact that the Swiss lever escapement is much less affected by uneven force, makes the remontoire mostly decorative today.

A. Lange & Sohne’s Calibre L072.1 - the fusee and chain mechanism is just visible around the barrel, top right
A Lange & Sohne

If a watch with a modern alloy spring and lever escapement has its timing verified by a machine when fully wound and then the watch is checked after 24-hours, there will most likely be discrepancies in timekeeping. The differences, however, will be minimal and inconsequential to the overall accuracy of the watch due to the fact that the balance is isochronous. The constant force mechanism, will, in theory, smooth out these discrepancies and produce the same numbers at any stage of wind.