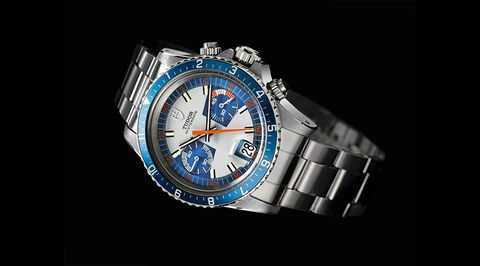 The market for vintage Tudor watches has boomed in recent times, as a new generation has discovered the brand. But with prices rising, what are the key references to look out for?

Tudor Submariners were used by the military forces of many countries including Argentina, South Africa, Jamaica, the USA and most notably the French Navy – the Marine Nationale (MN). The French Navy played a key role in the development of the Tudor Submariner and field-tested the watches as far back as the earliest Big Crown reference 7922 models.

The most well known and eagerly sought out of the MN watches are the non-date, blue-dial models with “snowflake” hands, often issued on grey fabric NATO straps.

MN MilSubs in circulation were sold off at government auctions or by ex-servicemen, and are generally authenticated by either the decommissioning card from the auction or by checking the serial number against the Navy’s watchmakers’ ledger books (records of the watches that were serviced for the Navy personnel).

It would be fair to say that Tudor was the innovative and experimental wing of Rolex (thinking of dial colours and style, compared to the conservative Rolex designs). One such innovation was getting there first with the automatic chronograph, introduced in 1976 with the launch of the three-register “Big Block” chronograph reference 9430/0 (Rolex only made the Daytona automatic in 1988, using Zenith’s El Primero caliber).

The name Big Block came from the fact that the case was thicker than previous chronos to allow for the automatic rotor. In fact, the Big Block was the biggest-cased watch from the Wilsdorf group until the introduction of the Deepsea Sea-Dweller.

There were some variations of this watch with so-called Monte Carlo dials (see below), which have become very sought after by collectors. The watches were available with three different bezel types – steel tachymeter, plastic tachymeter and rotating bezel with hour markers.

You could be forgiven for never having heard of or seen the Tudor Chrono-Time. During the ‘70s the integrated case and bracelet look, defined by Gerald Genta with his Royal Oak for Audemars Piguet and Nautilus for Patek Philippe, became widely popular.

Rolex thoroughly ignored this, but Tudor had no such qualms. It launched a range of watches that had a new case shape and an integrated bracelet. The most famous example of these case shapes is the Ranger 2, but another sports watch that had this case was the Chrono-Time. The watch was available in both steel and gold plate and featured a bi-directional bezel that was very similar to the Submariner.

Measuring 38mm across, these were a hybrid dress/sports watch in the same vein as the Rolex Turnograph Datejust. Most of the examples seen have blue or maroon dials and bezels, but there are some rare variations out there.

What makes it so difficult? The main problem is that until the very last incarnation of the watch, Tudor did not give the watch its own reference number, instead opting to use cases and movements from standard Rolex Oyster watches.

This has led to counterfeit dials and hands being put into legitimate watches to the point that the vast majority of the examples that you see online are fakes or “frankenwatches”, and it takes a certain amount of knowledge and resilience to unearth the real deal.

If the Paul Newman is the holy grail of Rolex Daytonas, then the 7031/2 “Homeplate” is the most desirable of the Tudor chronographs.

Launched in 1970 with a handwound movement, it was the first of three series of chronograph watches that featured colourful dial designs (collectively referred to as Monte Carlos, as their looks were reminiscent of Monaco’s gaming tables). The Homeplate was so-called due to the similar shape of the hour markers to the home plate base on a baseball field.

It came with both steel and bakelite tachymeter bezels and a choice of grey or black dials – black dial versions are ultra-rare, with currently only half a dozen in known existence. Tudor did produce a prototype version with a rotating bezel, ref. 7033 that was never produced, but on which the Heritage Chronograph from 2010 was based.

The Submariner 7928 was one of Tudor’s longest running references. Launched in 1959, the watch housed a modified move- ment from Fleurier, the caliber 390.

The first iteration of the watch featured “square” crown guards, but it became apparent that the square guards made unscrewing the crown very difficult and so the cases were modified to have a more pointed crown guard (PCG).

The last batch of 7928s had rounded crown guards, a development of case shape that is roughly inline with the Rolex Subs.

One of the key aspects of the collectability of Submariners, both Rolex and Tudor, is the dials. There were five main ver- sions of the 7928 dial which evolved over its near decade-long production run. The first and most collectible are the Mk 1 gloss dials, with gilt (gold) chapter ring and lettering.