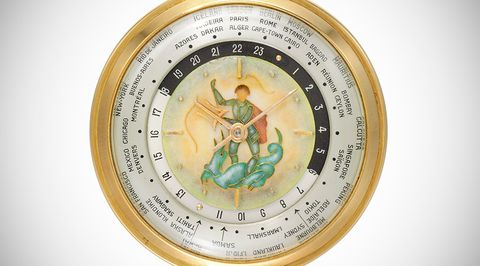 On the 70th anniversary of VE Day – and as the United Kingdom discovers the results of the 2015 General Election – Sotheby’s announces that it will be auctioning a pocket watch given to former Prime Minister Winston Churchill.

And not just any pocket watch. The watch in question is one of only four ever made, given by a group of prominent Swiss citizens to the four allied leaders – Churchill, Charles de Gaulle, Joseph Stalin and Harry Truman – at the end of World War II.

It was designed and made by watchmaker Louis Cottier, in collaboration with the manufacturer Agassiz & Co. Cottier is famous for inventing the traditional world timer complication, as adopted most prominently by Patek Philippe and Vacheron Constantin.

The watch therefore has a 24-hour inner ring surrounding the enamel illustration, with day-night divisions, and a large, detailed city ring around the inner bezel. As well as mainstays of worldtime city rings, the watch includes several names that date it, including “Aden”, “Ceylon”, “Saigon”, and “Peking” as well as some names less often seen: “Skagway” and “Klondike” (in Alaska and Canada respectively), at 13 hours behind GMT.

Each watch was personalised to the leader receiving it: Winston Churchill’s watch, therefore, bears an enamelled dial showing St George slaying the dragon, and has a trident for an hour hand. On the caseback, there is a “V for Victory” engraving, with the words “1939 – Prime Minister Winston Spencer Churchill – 1945”.

The yellow gold watch will be auctioned on 22 September at Sotheby’s London, with an estimate of £60,000 - £100,000. There is currently no information on the condition of the movement.