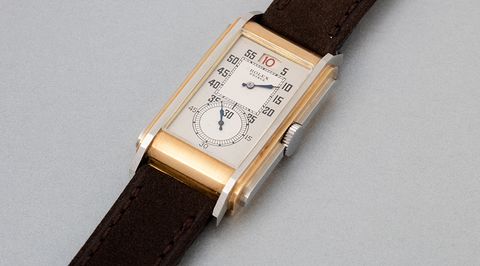 “Heritage reissue” has become just about the most overused phrase in watchmaking lately, but the wave of throwback pieces has for the most part been limited to sports watches, military pieces and classic chronographs. What about bringing back some of watchmaking’s more flamboyant dress watch designs?

For the dandy in all of us, here are six dress watches that manufacturers should absolutely bring back into production. Ranging from 1921 – 1973, all are quite different, but common to the group is a sartorial presence – these are pieces made to draw attention, start conversations and telegraph personal style. Some are more likely than others..

According to a 1936 Rolex advertisement, this two-tone gold jump hour “doctor’s watch” was less than £40 brand new. Classically Art Deco, the case reflects the lines of the high-speed trains of the day, hence the collector name “Railway.”

The manual wind movement has an unexpectedly large balance allowing for a longer power reserve and greater accuracy. Rolex, not Rolex Cellini, should shock collectors with a reissue of this piece, precious metals, manual winding, red numbered hour wheel and all.

Likelihood of it happening: 1/5. And that’s being generous. For all the love that this Rolex Prince undoubtedly deserves, it is a million miles from modern-day Rolex’s image. Still, we can dream.

This very watch was created in 1921 for the Maharajah de Rajpipla - Mr. Pip to his friends – who was one in a group of “ultra sophisticated,” “jet setting maharajas” who “took the world by storm” during the 1920s and 30s. From his English estate he held court with the British Royal family and the elite of stage, sport, literature and fashion. A penchant for luxury meant a custom-enameled Cartier Tank Louis Cartier, with two subtle stripes of black enamel running the length of the case.

Likelihood of it happening: 4/5. In fact, Cartier’s Special Request department continues to accommodate this art today, and Cartier is sufficiently in touch with its history to consider bringing something like this to the core collection.

Produced the year the U.S. stock market crashed, this platinum jump hour perfectly encapsulates the all-too-sudden desire for inconspicuous luxury from a segment of that era’s privileged class. The austere looks give nothing away with respect to the intricacy of the movement and the digital pocket watch origins from the 1880s. AP made other jump hours but this aesthetic is such a counterpoint to its graceful calendar watches of the day, a re-edition would make a statement, no question.

Likelihood of it happening: 3/5. Ok, so on the one hand it is by far the most unusual design on this list, but on the other, we know AP loves to make waves every now and then. And, in acquiring the Marcus Collection (of which this watch was actually a part) it has shown that it is acutely aware of the value of its back catalogue right now.

Though a less prestigious complication than perpetual or annual calendars, there’s actually a case to be made that the triple calendar is enjoying a resurgence (even Roger Smith is making one, after all). Rendered in its original 36mm proportions and teardrop lugs, a re-edition Jaeger triple calendar in platinum with a salmon-colored dial and an aubergine-colored alligator strap, as seen here, would be spectacular - all the better if it could come double signed Jaeger-LeCoultre and Cartier, like the old days. Oh and it also came in yellow gold, with a moonphase, where that red really pops. Could it be known as the JLC Blood Moon?

Likelihood of it happening: 4/5. Ok, maybe not the double-signed part, despite the fact that Cartier and Jaeger-LeCoultre are connected via Richemont. But with calendar watches enjoying real popularity, plus the collector-bait of details like teardrop lugs (something Vacheron Constantin established with the Cornes de Vaches chronograph) and vivid colour accents, it would be a total coup to bring this back.

According to a Sotheby’s catalog from 2007, this white gold Patek with a “Vermeer” dial is so hard to source the lot notes read: “To the best of our knowledge only two or three other examples in white gold have appeared publicly.“ In fact, Sotheby’s sold this very watch in 2005 as well. The dial is a tremendous colour, and TV-shaped cases are a case style that so far has been overlooked by the heritage reissue craze. But what we’re really in love with here is the “snakeskin” white gold bracelet. It’s pure 1970s exuberance; a different kind of elegance.

Likelihood of it happening: 2/5. Patek Philippe has been largely unmoved by the recent vogue for all things heritage – partly because most of its models have been in continuous production for decades anyway. It follows its own path, happy to let trends wash over it. Still, walk in with a big enough chequebook, and the brand is rumoured to be open to a wide range of bespoke requests.