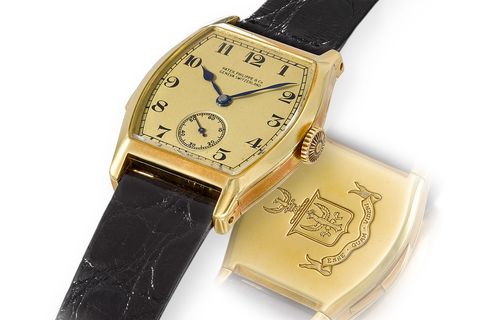 The now world-famous, all-record-smashing $31m sale of the Only Watch Patek Philippe proved a major distraction from November's regular flagship Geneva auctions - but that doesn't mean they didn't happen.

You can read QP's full online report of the spectacular Only Watch result here, but what did become of the other 1,500-plus lots offered by Antiquorum, Christie's, Phillips and Sotheby's during this annual four-day horological bidding frenzy?

The answer is that they fetched CHF 57.4m between them - and here's a run-down of who sold what, in order of appearance.

While Only Watch was still underway in downtown Geneva, Phillips kicked off the auctions proper at its vast marquee in the grounds of the lakeside La Reserve hotel. Gavel-swinger Aurel Bacs displayed the usual showmanship that turns a potentially dull few hours into an entertaining theatrical occasion, igniting proceedings by hammering down 56 of the 62 lots contained in a special 'Double Signed' catalogue for a useful CHF 6.7m As the title suggests, the themed sale focused on watches with dials signed by both the manufacturer and the retailer, an increasingly popular collecting area.

Predictably, Patek Philippe pieces dominated (taking the first nine spots in the top 10 list) with the the star performer being a 1971 Reference 2499 perpetual calendar chronograph in pink gold that featured a dial carrying the name of Neapolitan retailer Trucchi.It drew Sfr 1.5m, with the 10th best-seller being a truly gorgeous Audemars Piguet chronograph that bore the mark of the legendary Milanese jeweller Gobbi. Its condition belied the 80 years since its manufacture and, at CHF 137,500, it looked like money well spent for what was probably a unique watch.

The main Phillips sale, meanwhile, was topped by the sale of a 1942 Rolex Reference 4113, the ultra-rare split seconds chronograph that is believed to have been made in tiny numbers specifically for presentation to a group of leading racing drivers. This one realised CHF 1.9m , a price matched by a 1952 Rolex 'Stelline' triple calendar watch that once belonged to Gordon Bethune, the colourful CEO of Continental Airlines from 1994 - 2004.

A Philippe Dufour Simplicity in white gold also made it into the top 10, the unworn, 2002 example fetching an above-estimate CHF 325,000. Also of note was a one-off Zenith El Primero that was designed in collaboration with Bacs and the Phillips team in order to be sold for the children's cancer charity Zoe4Life. Featuring a blue lapis lazuli dial , it made CHF 75,000.

With Phillips having set the benchmark (and producing a sale total that its competitors failed to break) Antiquorum took to the stage on Sunday for the start of a two-day blockbuster comprising 652 lots that recalled some of the high-rolling occasions when the firm was number one in the business. The top lot proved to be a Rolex Cosmograph Daytona with Paul Newman 'Musketeer' dial (so called because of its three colours).

What made it fly, however, was the fact that it featured the so-called 'Oyster Sotto' marking in which the word 'Oyster' is thrillingly - to PN fans, at least - printed below the Cosmograph name. No, I don't get it either, but it still helped the watch to CHF 1.1m.

Patek Philippe's Jumbo Nautilus demonstrated its continued strength as a blue-chip buy when a 1989 example (so from the last year of original Jumbo production) reached close to CHF 119,000. The appeal of the watch was boosted by the fact that it had been consigned by its original owner and was offered complete with its box, papers and swing tag.

Another rare and deserved star among the top 10 best sellers, meanwhile, was a superb example of IWC's mind-bogglingly complex Il Destriero Scafusia grand complication, the model launched in 1993 to mark the brand's 125th anniversary. This one, made in 1995, appeared to be virtually unworn and again, it had the all-important box and papers. Also worth a mention was number one of the 50 'Nightwatch' pieces produced by avant-garde maker Urwerk. The UR 101 model was made in 1999, two years after the firm was founded, and was owned for 15 years by Thomas Baumgartner (who set-up the company along with his brother, Felix, and Martin Frei).

Christie's might not have achieved anything like Phillips' total, but the house did manage the distinction of selling the most expensive watch to cross the block during the four days of auctions. As investments go, the 1927 Patek Philippe, yellow gold, tonneau-cased minute repeater has proved to be copper-bottomed - it last appeared for sale in 2012 when it fetched $2.6m, but this time it drew CHF 4.5m.

The reason for its popularity? It was made for none other than Henry Graves Jnr, the U.S. banking tycoon who went down in history as Patek Philippe's most famous client thanks to his enthusiasm for the firm and his purchase of the 'Supercomplication' pocket watch that - until this month's Only Watch sale - held the record for 'world's most expensive timepiece' since it changed hands first for $11m in 1999 and again 15 years later for $24m.

Second spot went to a modern Patek rarity in the form of a special order Reference 5016P with unique 'Ferrari red' dial detailing . The platinum-cased, perpetual calendar, minute repeating tourbillon was consigned by its original owner to whom it was sold new in 2005. It fetched CHF 879,000.

It was left to Sotheby's to close proceedings in Geneva, starting on Monday evening with the second part of its five-part dispersal of the 'Masterworks of Time' collection of rare pocket watches amassed by the late German retail tycoon Erivan Haub, who died last year aged 85. The highlight this time was not a watch, but a gold, enamel and diamond-set musical singing bird cage (complete with clock) that was made for export to China in 1815. It realised CHF 1m, having been bought for the collection in 1987 for around £300,000.

Top timepiece of the single-owner sale was a pink gold, hunting-cased clock watch by A. Lange and Sohne that drew CHF 437,000, with a gold, enamel, rock crystal and diamond presentation watch made by Adolf Schneider for King Ludwig II of Bavaria selling for CHF 162,500, more than two-and-a-half times expectations.

Sotheby's regular, various-owner watch sale the following day was dominated by Rolex and Patek Philippe models at the top end, but with less familiar pieces making a mark elsewhere - notably a Harry Winston Opus X that sold for CHF 87,500 (having cost CHF 252,500 when new in 2011...); a delightful set of three Breguet watches from around 2000 that comprised a minute repeater, a chronograph and a jump-hour model (CHF 56,250) and a selection of vintage Cartier watches, including a 'Gouvernail' or 'helm' watch that sold for a bargain CHF 10,000.

Advertisement - Continue Reading Below
More From Vintage
The Time Keeper
Twice as nice: the allure of double-signed dials
Advertisement - Continue Reading Below
A quirky customised take on vintage watches
The tale of Niki Lauda's Rolex
The watch that took 126 years to complete
Five vintage watches we'd love to see reissued
Examining the biggest chronograph boom in years
Winston Churchill’s pocketwatch goes up for auctio
The vintage Tudor watches you need to know
The best watch I ever sold, by those who sold them