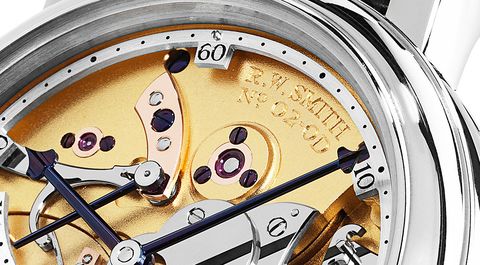 It must drive watchmakers mad. If you think that’s overstatement, visit the workshops of A. Lange & Sohne, or Vacheron Constantin, or any other high-end manufacture. You will find rooms full of the most experienced hands in the business, labouring with the patience of saints on bevelling, polishing and engraving components measuring mere fractions of a millimetre across.

If they make a single mistake, they must give up and start again. When they have finished, all being well they will have contributed to a piece of hand craftsmanship that you could pore over with a loupe for hours without finding anything out of place.

So imagine what it must be like to sit back and admire one’s handiwork, to be greeted by the sight of half a dozen screw-heads (painstakingly hand-blued in a naked flame) all pointing in random directions.

We asked Roger Smith – a man not known for accepting compromise in the finishing of his watches – what the answer could be. Why has the world of watchmaking never eradicated this aesthetic flaw? Here is his comprehensive answer:

“The screws are never aligned because it would be a very difficult engineering task to make sure that the start of each thread within the dial plate began in exactly the same orientation.”

“Even if this were possible you would then have watchmakers tightening each screw to a slightly differing torque which would then misalign the screw slots causing all sorts of visual issues.”

The one famous counter-example – of sorts – is that of the “screws” on an Audemars Piguet Royal Oak, which are aligned perfectly. But of course as anyone who has looked at a Royal Oak for more than a couple of seconds can appreciate, those aren’t screws at all (think about it – hexagonal holes?).