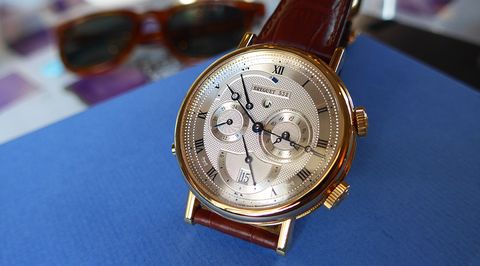 Breguet
I’ve always excused the amount of time I spend with my head in my smartphone by reasoning that it’s my second brain and does a lot to make up for the first. Of the things I am most dependent on, my iPhone is fourth only to oxygen, sleep and the attentions of a good woman.

This is why I was somewhat apprehensive when invited to eschew the reassuring notifications of my phone and instead subject myself to a week-long sociological experiment, during which I would attempt to organise my life using an alarm watch. The aim being to live with less smartphone, and to establish whether there’s any point to an alarm watch in a post-alarm-watch world.

Between us, SalonQP.com editor Chris and I picked six watches. The suggestion that I might need to wear all of them at once to come close to compensating for my phone was met with derision (oh, come on Chris). Rather I would wear one a day and keep a diary. All a bit Bridget Jones, I said, but in the interests of front-line investigative watch journalism, I took the commission. And went to bed.

Monday. My phone wakes me. Turns out I have forgotten to set the Advisor, and forgotten to turn off my phone. An inauspicious start, but one, note, that has nothing to do with how easy it is to use Tudor’s priciest watch, and everything to do with my inability to alter my Sunday evening routine.

Still, all is not lost. I have to get my children out of the house by 8.35am and walk them to school. I wouldn’t normally set an alarm for this, but then we are normally late. Maybe this is the start of the new us.

Tudor’s alarm-setting system is a doddle. Pull out the top crown to position one to wind the alarm’s barrel (a power reserve at 3 o’clock tells you when it’s full); to position two to set the alarm, shown by the red central hand; push it back in; and then press the button at 7 o’clock so the alarm is on, indicated in an on/off window at 9 o’clock.

At 8.39am the alarm goes off. We are late. Thus ensues a chaotic, shouty scene during which I yell at my kids to finish their breakfast, get their shoes on and get out of the house. Setting the watch is easy. Setting it accurately against an hour track with only 15-minute markings as your guide, less so.

On the plus side, the ring is clear and reasonably loud – loud enough to hear above the sound of this morning’s breakfast table debate about which Top Trumps are best (supercars, obviously). The Advisor’s case is made of steel and Grade 2 titanium (and therefore polishable, unlike Grade 5), a material that gives particularly good alarm.

It’s only on setting the alarm again later to remind myself to post a letter (success!) that I remember the Tudor rep’s instruction to look out for the abrupt stop to the alarm’s ring. Most alarms fade as the power runs down, but Tudor has engineered the Advisor so it cuts the power before the fade kicks in. As it transpires, not even the obsessive Breguet has been so painstaking with its alarm watch (see day 6).

Ah, the ‘Cricket’ watch brand. I’ve not had a Vulcain on test before, but know of its alarm watch, in-house and US-presidential credentials (Richard Nixon and LBJ were fans – but we don’t need to talk about that). All three are on show here in this brown-dialled, alligator-weave-strapped model, and gee, it’s a priddy lil’ thing. It really is.

Today’s must-not-miss event is getting myself out of the house; a Herculean task in the life of a freelancer. I’ve a meeting in London at 11am, an awkward time – enough time before leaving to start something, but not enough to get it finished.

Time to deploy the Vulcain. Pushing the button at 2 o’clock releases the crown and activates the alarm-setting mode, done via a clockwise turn and a central hand. Very simple, although like the Tudor, a bit of guesswork is required to get it right, aided only by 10-minute markers between the hours. At 10.09 the alarm goes off, which is close enough to what I wanted. The ring is a little harsh, not unlike the sound made by a highly stressed bluebottle trapped under a glass.

Woken by the sound of a Senator. Must be a joke in there somewhere. Go back to sleep again. Wake up half an hour later as front door slams. Wife has taken kids to school. Again. Note to Germany – snooze function, please.

While scoring zero out of 10 for fatherly duties this morning, I have slept through the Senator’s alarm, which is an achievement. On test, five of the six alarms rang true for between 15 and 20 seconds. Glashütte’s manages an astonishing 80 when fully wound. I’m impressed.

I’m also impressed by the fact I can set the alarm for any time over the next 31 days, or at least, for any day of the month (corresponding to the oversized – too oversized, to my mind – date), as well as at any time. This is done via a pleasingly easy-to-use system that combines the crown at 10 o’clock and the pusher at 8. Push once to activate the day setting and rotate the crown; a second time to activate the hour setting; a third time to turn the alarm on; and a fourth to turn it off. A small window on the subdial shows you which mode you’re in. Interesting fact – the movement behind this has 631 components, 340 of them in the diary module.

Less impressive is the Senator’s aesthetic. A bit heavy-set for my tastes. It’s 14.4mm thick and sits even higher on the wrist because of the way the strap integrates into the case. Might settle over time, but I’ve only got 24 hours to play with.

Verdict: Excellent staying power, set-up’s a cinch, but clunky on the wrist

I’ll admit to being reluctant to test this watch. It came onto the market in 2009 and, well, you can tell. But it’s still a Jaeger-LeCoultre, and it’s also the only watch in my line-up with a voluminous case made of Grade 5 titanium. Even if I’m not expecting grace and beauty, I am expecting noise on a grand scale.

It doesn’t disappoint. Wound and set via the top crown, this limited edition (apparently this might just be the last of its kind to sell new) beast lets rip with the school bell of alarm watches. On that note, I’d like to say that I set it to remind me to pick the kids up from school, but that would be a lie. Instead, I set it to remind me to take the chicken Kievs out of the oven. Which I burned, but that's not the watch's fault.

If I’m honest, I am no longer using alarm watches to get me out of bed in the morning. The pattern emerging is that of using the watches to remind to do something important, usually early in the day. Blancpain’s white gold Réveil GMT (there’s a second time zone here, too) goes off at 9.17am. And I can’t for the life of me think why.

No matter. Today I have to pick up some dry cleaning, collect a sorry-we-missed-you package and call my parents to wish them happy anniversary. That’s it! The alarm was to remind me to make a note of these things first thing. First thing-ish.

Blancpain’s ‘reawakening’ watch (that’s one of the possible translations of Réveil, at any rate), has an on/off function, which I’m starting to think while nifty is unnecessary, and an alarm power reserve indicator. This too is largely unnecessary – when the Jaeger is fully wound, the crown simply won’t turn any further – but it’s deeply satisfying to watch. As the alarm runs down, the retrograde hand at 11 o’clock skips across the dial, which kept me entertained for a full 15 seconds. There remains something wonderful about watching – and listening to – micro-mechanics in action.

Verdict: Keeping the tradition alive, but a bit dead behind the eyes

I’ve left the watch good enough for a Russian autocrat until last. Not only is it the most regal sounding, it’s also the only watch I have on test made of yellow gold, which to my ear does indeed create a far more mellifluous ring than say, the Vulcain. Of course, it also makes a far deeper hole in your pocket.

Visually, the Romanov splits my own opinion. On the one hand, it’s a Breguet, so yes, it’s elegant and graceful, and the kind of watch you wear when you have a retinue of people to remind you when your next international summit starts. On the other hand, the dial layout makes the alarm’s power reserve indicator look like a Roger Moore eyebrow, and the musical note picked to indicate the alarm is in ‘on’ mode is a bit Family Ness.

Setting the Romanov is a mixed bag, too. To the good, you can set the alarm time to the nearest minute with great ease on the two-handed subdial at 3 o’clock, using the bottom crown. Winding the alarm however, is done using the top crown, which feels counter-intuitive and took some getting used to after the more synchronised Tudor, for example.

Note I neglected to mention how the Blancpain alarm system works on Day 5 – it won’t surprise those who recognise this and the Breguet as products of sister brands that the two work in exactly the same way, albeit that the Blancpain’s crowns and pusher are screwed-in. Breguet’s Calibre 519F and Blancpain’s Calibre 1241H are one and the same movement, after all.

Note the similarity in the construction, the shape of the main plate and extremely large hammer, with the Breguet above and the Blancpain below.

Day 6 incidentally was a Saturday. I didn’t need an alarm.

Verdict: Like being transported back to the 19th century by an immaculately presented troop of bell-ringing servants