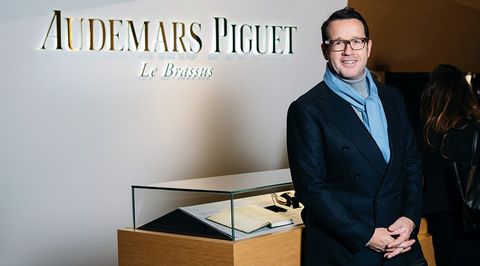 In a tough year for Swiss watchmaking, Audemars Piguet is enjoying double-digit growth. Or at least, so says François-Henry Bennahmias, the independent company’s outspoken CEO. We sat down with the bullish, frequently sweary Frenchman in his movie-memorabilia-filled office in AP’s Le Brassus headquarters and quizzed him on those claims, on his yellow gold bet, on how the Swiss watch industry gets itself out of its current predicament, on golf, and on why he didn’t sign with the world’s biggest movie franchise when he had the chance.

The watch industry is in crisis at the moment. How does Audemars Piguet fit into that picture?

We are outside of the picture. Our growth is double digit. The brands performing this well, I can count on one hand. Not including my thumb. We only make 40,000 watches a year, but this year we could already have sold 42,000 to 43,000. By the time we do our next budget at the end of September, maybe we could have done 45,000 pieces this year. But we’re only doing 40,000.

Seriously? No one’s growing at the moment. How can that be?

There are many things – building brand awareness, building the brand perceived value, communication, new product launches, exposition in stores, training sales staff… There are so many components for success. It helps us, obviously, to have an iconic design like the Royal Oak because people and buyers want recognition – they want others to know they wear Audemars.

Do you think the watch industry can get out of its downward spiral?

Life is about cycles. It’s when things get tougher that people finally get smarter and come up with new innovations that could rebuild momentum. So who knows? What I know is that we are going through a consolidation period. Brands will go down, retailers will go down, and that’s part of the normal cycle of life. And then a few years from now, some of them will be stronger than ever. So it’s not something we can plan, but we need new blood in this industry.

What do you think of as new blood?

We cannot keep doing what we’ve been doing for the last 30 years and expect things to stay the way they are. The world is changing so fast, the consumer is changing, the new generation of consumer is not buying the way we buy today, so we have to adapt. Today, it’s not about being big, it’s about being agile and fast.

First of all, whether people like it or not, it’s the end of the people in between. Not just for watches. There are a lot of industries that will be challenged, when the only thing they provide is being in between the client and the product.

So you’re going to be selling direct to the consumer?

Yes. I’m not saying it will be the end of the retailer. I’m saying the retailer will have to adapt to this new way of playing. And it might need to be closer to the brand than it is today.

You said the decision to launch a yellow gold Royal Oak collection this year was a bet. How’s that working out?

We won the bet. For two reasons. One, the press loved it, and because we are the only ones with yellow gold, everyone talked about it. And two, because men and women are buying it.

You’ve also promised that you’ve got something groundbreaking up your sleeve for SIHH 2017. What can you tell us about that?

Unfortunately, it’s been delayed. Sometimes we’re not 100 per cent sure everything will work perfectly and I don’t let anything go through the door if it’s not right. It’s exactly what we did with the Supersonnerie this year, meaning it started as a concept watch and then it becomes real. It’s in the final stages of development, and we were almost there, but one little thing ruined it for us.

A couple of years ago, you promised a line of watches exclusively for women, which has yet to appear – is that still part of your plans?

So a new design?

Was this in response to what’s happened in the market?

No. It was a technical issue. We couldn’t do our first idea exactly the way we wanted. So we started again. It could come in 2018.

What impact is golf having on your business?

You can’t measure it completely. We’ve been in golf for 11 years with a big roster of players. We have 12 to 15 players in any given year. We’ve had a lot of victories and a lot of disappointments.

We chose him for his talent and his personality. If a guy is a top-level golfer, but a joke as a person, then we won’t do it. Andy is very easy going. We don’t want snobs, people who won’t spend time with our clients – we want people who are friendly and get our family vibe.

We never sign for one year. Golf doesn’t work in terms of one year. Henrik Stenson won the FedEx Cup and the Race to Dubai in one year in 2013, and then 2014 and 2015, nothing. And then this year he won a major [the Open Championship in July]. In golf it’s never about one year and we have to give them time. We understand what golfers have to go through. Andy ranks top 50 at the moment – maybe next year he will win a major. Who knows? He has the talent for it.

Your office is full of sports and film memorabilia, and modern art. What relationship does this have to the brand, or is it just you?

It’s me. There are stories behind everything. All the experiences, the connections with people. The cyborg was a gift from Arnold [Schwarzenegger].

So you’re not planning to get Audemars Piguet into the next Star Wars film?

No, we’ll never do that. Funnily enough, 15 years ago we were approached by MGM to do James Bond. There was a discussion with Rolex and Omega, and they came to us. We said no, because they were looking for huge promotion around it. Every time there’s a new James Bond, Omega do a lot of advertising for their special watch, a worldwide campaign – and that’s not us. To be in a movie – sure. To do something special – yes. But to run a campaign to say it’s James Bond’s watch – no. Not us.

Do you regret the decision?

As you look to grow the brand, where will you place it?

I’m not sure. I wouldn’t do something that would give the brand global attention. I would do it much more targeted. Sniper style. At one point we were in the TV show Entourage, and we got some great exposure from it. We don’t actively pursue those opportunities – for example, we are in Mr Robot, but we didn’t do anything. The guy just wears an AP.

You don’t want to do something global?

We have to be perceived as a brand that doesn’t need to promote itself and to pay for placement to convince potential buyers to make the move. A survey we did in the US 15 years ago showed they don’t really care about ambassadors. They don’t need to see an ambassador wearing a watch to make them think they should buy it. What do they want? Access to the ambassador. Because at their own level in business, they might be the LeBron James or the Lionel Messi or the Andy Sullivan. In their own world they are champions, so what they want is interaction. That works. But to say, ‘because I’m worth it?’. They couldn’t care less.

But you are much more commercial than your competitors – you’re the only one of the so-called Big Three that has sports ambassadors and uses them commercially on a global level.

Yes, but don’t forget that, except one, every single one of ambassadors wore Audemars Piguet before they started a relationship with us. It’s a slightly different relationship therefore. Every time we do an event, people always say how these guys are really part of the brand. And our clients respect the fact it’s real and the guys know what they’re talking about.