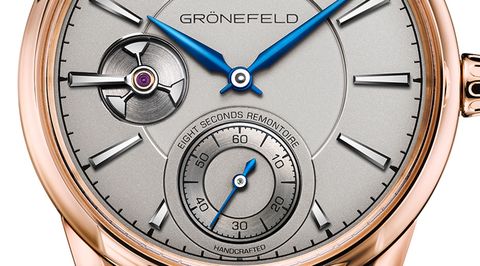 As the year draws to a close, we round up the watches that have stood out for us over the last twelve months. QP's editors and contributors were all asked to pick one watch that stood head and shoulders above the others in 2016 - whether as a matter of personal taste or wider significance. The results paint a pretty good picture of the watch industry in 2016...

If 2016 has a place in watch history beyond the appalling export figures for the Swiss industry; it is because this was the year that design became the story. Designers have traditionally been anonymous, an approach that makes sense in that watch design is necessarily a collaborative process that takes into account engineering and cost as well as pure aesthetics, let alone “brand DNA”. But every now and then individuals such as Gerald Genta are needed to break the mould. The best of this year have been the Sports-Luxe watches that descend from his Royal Oak for Audemars Piguet and of a rich crop, my pick is the Laureato.

Money no object, I'd shop for clothes exclusively at Chanel. Which obviously ain't happening, because (a) I will never be that rich, and (b) Chanel doesn't do men's fashion anyway. A crying shame, seeing as their fragrances for men and, as of this year, their first bona fide men's wristwatch show such an keen affinity with the modern man. Yes, the J12 was originally conceived as a "unisex" watch, but it always took a certain man to brave it – even the Superleggera and Chromatic variants, which in hindsight now seem like desperate attempts to lure a more butch customer.

But the Monsieur is everything a men's Chanel watch should be – suave, sophisticated, exquisitely executed – and everything that forward-thinking fine watchmaking should be in 2016. Chanel invested cleverly in Romain Gauthier to help with the component machining, but aside from this essential technical help, it's easy to see that the thinking and design work is Chanel through and through. The orbital bridgework is so elegant, it's remarkable that this is a first. They said the dial design is entirely in service to what's ticking beneath, but even that's just so. I cannot wait to see how the Monsieur evolves.

It’s not really what this watch does, or even why, that I find so dazzling: it’s how you see it happen. From the front, it’s the most softly-spoken Gronefeld design so far, a mere 39.5mm wide; but with a little turbine at 9 o’clock that fizzes for a moment, stops, and fizzes again at eight second intervals, appearing to jog round the minute hand. Turn it around, and you see what’s driving this: one of the most cosmically thrilling movements ever created, its multitude of parts springing to life in tandem with the turbine, like a full orchestra that only plays every eight beats. The theories behind remontoire mechanisms may be as dry as old bread; but this watch is a quiet thrill-ride of mechanical ingenuity, executed with absolute artistry.

Despite having been impressed by the design, finish and integrity of many of Montblanc's new generation watches, I've always struggled to come to terms with actually seeing the name on a dial - until the recent reveal of the 1858 Tachymeter Limited Edition in bronze. This vintage-look, monopusher chronograph just looks absolutely right with a bronze case, and the beautifully finished hand-wound, column wheel movement remains a delight to behold, too. It's a perfectly conceived and fitting tribute to the historic Minerva pieces that inspired it and is, quite simply, the best vintage-look watch to have been unveiled in 2016 [Ed. "unveiled" is the operative word; Montblanc will officially launch this watch in January but it just sneaks onto this list].

Don’t you get just a little bored with watches kind of all looking the same; expressing much the same thinking? Hence the relief provided by the Ressence Type 5B. Aside from the sheer good looks of the piece - modern without being modish, minimalistic without being militaristic - it’s the result of an industrial designer, rather than a watch designer, considering watches anew. That means there’s no crown - winding is via the backplate; there’s the lack of weight - it’s just 87 grams; and it’s oil-filled - using an incredible system of mini-bellows to make this mechanical beauty utterly legible, even underwater. Spectacular. [Ed. the Ressence Type 5 did in fact make its debut at the very tail end of 2015, but we're going to allow it a place on this list nevertheless.]

Josh Sims is a freelancer and regular QP contributor. Earlier this year he explored the wonderful innovations being made in the world of luminous watchmaking.

The Dior Grand Soir Kaleidiorscope is one of those watches that has to be seen to be believed. On paper, it’s all very pretty but you don’t get any idea of the three-dimensionality of the dials or have any sense of the way the light refracts off the arrangement of precious stones, whose patterns were determined by viewing embroideries from the Dior archive through a kaleidoscope, hence the wonderfully punning name. Unlike many watches that deliver dial side but lack heart, this contains a Zenith Elite automatic movement with a lacquered oscillating weight. And Dior has even shown a bit of a subversive sense of humour by offering these incredible unique pieces on denim straps. Who says you have to keep your haute horlogerie for best?

As the years go by, the mental watch vault becomes increasingly congested, and the propensity to forget increases alarmingly. When asked to pick the most virtuous timepiece of 2016 therefore, the ‘first to mind’ test is as good a barometer as any. In my case, that watch is Piaget’s steel Polo S. Not for its design or intrinsic watchmaking value, where it scores perfectly adequately, but because it is a bellwether, showing how the watch industry is responding both to the consumer shift West, and to the great threat of younger watch buyers being priced hopelessly out of the market. Next year, we will see more of the same.

There is nothing fundamentally original about the new Saxonia Thin in rose gold. And yet, I want it. Badly. I never thought I would say that about a hand-wound, 37mm time-only wristwatch in a precious metal. Not before the age of 40, at least. But while the industry continued to welcome new materials, bizarrely shaped watches (others might call them futuristic), and even smart tech, it’s perhaps the most traditional watch that sums up the year for me.

Some might dismiss the Saxonia Thin because of its size. But Lange creates the illusion of a large watch with thin, long indexes that stretch an empty white dial outwards, while the thickness of the bezel adds just enough weight to the wrist to take it seriously. The real talking point of the watch though is, without a doubt, its movement. It’s high-end Lange all the way here, with black polished surfaces, German ribbing, a hand-engraved balance cock and three screwed-down chatons. This is sure to be a modern classic. That, or maybe I’m just in a hurry to get to 40.

Arthur is Hodinkee's European editor and a QP contributor.

How to pick just one watch from the multitude of potential candidates I’ve seen this year? Whilst scanning through hundreds of wristshots on my phone it occurred to me that the answer was sitting on my wrist. Only one [new] watch impressed me sufficiently to progress from first furtive glance to retail transaction in 2016 and that has been the Oris Divers Sixty Five 42mm. The Divers Sixty Five of 2015 was a great watch but a little kooky for my tastes. The collection got serious this year with a watch that looks every part the vintage dive watch from the riveted bracelet links to the aluminium bezel. Add in a domed crystal and that lusciously deep blue lacquer dial and you have the makings of a modern [vintage] classic.

It must be a banner year because for the first time in my life, my hands-down year-end favourites are all meant for the female wrist! Or maybe this just means that the new breed of feminine watch has just gotten that good? The Fabergé Lady Levity is my winner because for me it has it all: dynamic visuals, magical customisability thanks to a technical process that “prints” platinum onto sapphire crystal then covers it with mother-of-pearl, elegant femininity without gemstones (!), and an exclusive manufacture movement made by Jean-Marc Wiederrecht of Agenhor for Fabergé. What else could you ever want in a watch?

The idea of a dressy Panerai ought not to work, and critics can rightly point to the diminished water resistance and slightly fey sunburst dial of the slimline Luminor Due. But it combines one of the few truly great watch designs with a wearability that I'd never experienced before in a Panerai; on the wrist, it was the watch I least wanted to part with in 2016. It says something about the industry at the moment, too: I thought hell would have frozen over before Panerai compromised on its macho case shape, but the need to diversify at relatively affordable levels is manifest everywhere you look.

Runners-up: Vacheron Constantin Overseas Ultra-Thin; Chopard L.U.C. GMT One in steel
Chris Hall is QP's digital editor. Recently, he has been overseeing the launch of QP's new iPad app, which you can download here.

Advertisement - Continue Reading Below
More From Watch Culture
Every Omega James Bond watch ranked and rated
ClubQP 2019 Winter Showcase: the highlights
Advertisement - Continue Reading Below
How Only Watch became such a phenomenon
Nick Foulkes on... Chopard's Alpine Eagle
This could soon be the most expensive watch
Five great talks coming to ClubQP this November
Highlights of the Swatch sale at Philips next week
Understanding Patek Philippe reference numbers
Introducing ClubQP
Can this watch heal you?