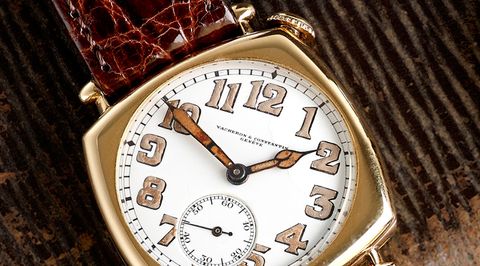 This is a rare and quirky watch, popularised through its 2008 re-issue as part of Vacheron Constantin’s ‘Historiques Collection’. The modern watch differs from the earlier models in the position of the sub-seconds dial, the use of a modern wristwatch movement re-positioning the seconds indicator at right angles to the crown rather than opposite as in the original.

Vacheron Constantin’s first watch of this type was produced in 1919 and has the crown to the left of the strap attachment lugs. According to the literature, this was a run of twelve pieces originally intended for the American market but later made available more widely. This is understandable if you consider the dial orientation as it is very difficult to read when on the left wrist and seems to only make sense when worn on the right. Maybe there were not enough lefties in the US willing to absorb the initial production run, meaning that they had to be sold elsewhere. Certainly when given the choice, Vacheron Constantin chose to re-issue the later American 21 with the crown to the right of the lugs. This later model was also produced in a run of twelve pieces sold in the US between 1921 and 1931.

The question that immediately springs to mind is why would you produce an off-set crown watch in the first place? The usual answer given is that this is a ‘Drivers’ watch and that the alignment of the dial makes the watch easier to see when holding the steering wheel. This is a tempting and often repeated line which is also applied to the Cartier Tank Asymmetrique but I have to admit that I am not convinced about either.

The first concern comes when you strap the watch on your wrist. The visual impact seems oddly natural; think about it, when consulting your watch, your arm comes in front of you at a comfortable 45° angle unless you push your elbow out to make the horizontal (Instagram and WOMW fans will know what I mean) usually we visually compensate for the fact that our watch face is offline a little but with the American 21 it is presented straight up and down. This is true whether standing, seated or at a desk, anytime in fact except when driving; we would do as well to call it a ‘typing watch’. If we mime ‘holding the steering wheel’ at various inclinations and sizes there is no indication of improved visibility at all.

‘Drivers’ watches do exist, usually referring to the tightly curved watches originally produced by the American brand Gotham and then copied by Jaeger-LeCoultre and others. These were designed to sit on the side of the wrist which would then be positioned vertically when the wheel was gripped. The approach was adopted in later years with the Girard Perregaux Casquette, the Bulova Computron, the Riehl Syncronar and the Amida Digitrend – recently re-imagined as the MB&F HM5 ‘On the Road Again’. These ‘side-view’ watches all offer improved driver legibility but not so the Vacheron Constantin American 21.

Digging into the background of these off-set watches reveals that Vacheron Constantin were not the first to produce them. Their origin lies in the USA and the drive to produce more wristwatches prior to WWI. Stan Czubernat, trench watch expert and author of "Elgin Trench Watches of the Great War" and "Waltham Trench Watches of the Great War" says “The first offset crown round cases first showed up around 1914...(with)… cushion shaped offset crown cases introduced a few years later in 1917.” “In America there were basically two types of movements being manufactured during the Great War era, hunting case movements (savonette) and open face movements (lépine). Hunting case movements had the crown at the 3 o'clock position (traditional configuration) and open face movements had the crown at the 12 o'clock position (offset crown configuration). Due to the war effort shortages of trench watches (wrist watches) were wide spread with a high demand.

Essentially, early wrist watches were cannibalising pocket watch movements and there were fewer savonette movements as hunter cases tended to be made for men and so were a larger size. Smaller fob watches, used by women, were usually in the lépine configuration and so produced off-set crown pieces.

Nine case manufacturers produced round off-set cases while only three produced cushion shaped cases, predominantly for either Elgin or Waltham watches. These were trench watches with no indication of a connection with driving. When pressed on this point Stan says, “, I do not feel that offset crown cases were designed with "driving" in mind. In autumn of 1913 the Elgin National Watch Company introduced their first men's wrist watch and they used race car drivers as their pitch men. These men were Louis Disbrow and "Wild Bill" Endicott, they were prominently featured driving their race cars wearing an Elgin wrist watch in the print advertisements.

If the home of the off-set crown didn’t consider them as driving watches, I think we can safely assume that they weren’t. Instead we may have an interesting case of cross-pollination with American servicemen arriving in Europe in 1917 wearing cushion-shaped off-set trench watches out of necessity while a couple of years later Vacheron Constantin turned this into a luxury watch and sold it back to the USA, using their lépine-style pocket watch movement as a creative choice.

None of this detracts from the Vacheron Constantin ‘American 21’ as both a rare and fascinating watch. Taking a utilitarian style and transforming it into an idiosyncratic brand icon that is durable enough to stand re-release 87 years later is a testament to Vacheron Constantin’s vision and daring. With so few created it is elegant, eye-catching and highly desirable.

This story is reproduced with permission of Fellows & Sons.

With thanks to Stan Czubernat at LRF Antique Watches for help, insight and images