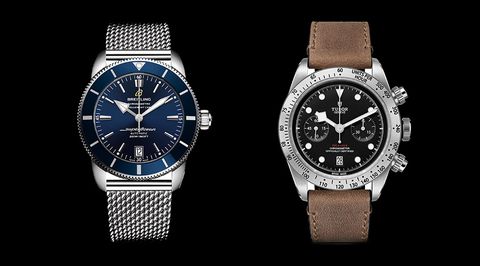 The most noteworthy development to arise out of Baselworld this year was arguably not a specific watch, but rather a partnership. Tudor and Breitling both announced that they had entered into a co-operative agreement that sees movements from each brand head in the opposite direction.

The deal plugs gaps in the offerings of each brand; Tudor receives a chronograph movement based on Breitling's now eight-year-old B01 (the MT5813, below) for use in its new Heritage Chronograph, whilst Breitling gets its hands on Tudor’s three-hand MT5612 movement, renamed the B20 after modification, to power its Superocean Heritage II.

Both brands achieve what they want with minimal expenditure, no movement development costs and no expensive re-tooling; the very definition of a win-win. Such partnerships and supply chains are the bedrock upon which the Swiss watch industry has been built, so why should this instance be worth mentioning?

Simply because for the first time in recent memory two major watch brands are quite happy to reveal that the branded movements going inside their watches have been made in someone else’s factory; none of the usual cloak and dagger, no need to dig or study side-by-side images of movements to reveal their true provenance.

“We receive a movement ready for casing, with our finishing and our specific components already assembled,” Tudor’s head of public relations Christophe Chevalier tells us, revealing the faith that each brand has in the other extends far beyond modifying ébauches.

End of an era?

As many brands blithely raced ahead in search of coveted manufacture status at any cost – usually millions of Swiss Francs – mention of any third-party assistance was, for a long time, seen as taboo.

This Manufacture era served a purpose beyond merely seeking independence ahead of ETA’s planned switch-off of its supply of mechanical movements to non-Swatch Group brands. In theory a vertical manufacturing structure affords a business greater control, exposing it to fewer external influences.

However it requires significant capital investment and potentially raises overheads in the short term and should demand fall away, the business is once again left exposed.

Marketeers would use the move in-house as an opportunity to add a new premium tier to watchmaking by extolling the apparently superior quality of in-house production, which in turn justified price increases.

But this vertical arrangement was never the norm in Switzerland; the traditional watchmaking landscape had previously been distinctly horizontal.

Switzerland is the world centre for the production of mechanical watches specifically because of the infrastructure of specialists such as dial makers, movement manufacturers and case producers that have always been needed to supply the more traditional etablissage method of assembling a watch from numerous third-party components – whether that’s bespoke or off-the-shelf – rather than making everything from raw materials under one roof.

While both Tudor and Breitling have made in-house movements a part of their business model – Breitling with the B01 chronograph in 2009 and then Tudor with the MT5612 inside its North Flag in 2015 – it has always seemed to be for the sake of independence rather than an expensive marketing exercise. This new, entirely sensible partnership suggests that the rules have once again changed.

Chevalier explains that Tudor’s new MT5813, the heart of its new Heritage Chronograph, starts life as a B01 at Breitling with Tudor supplying a small number of replacement components – namely tungsten winding rotor, variable inertia balance wheel, silicon balance spring and the axis. Breitling then carries out a mechanical modification allowing for a 45-minute chronograph register, a feature of Tudor chronos since the very first 'homeplate’ Ref. 7031 in 1970, rather than the B01's 30-minute sub dial.

Breitling then decorates the movement in Tudor’s ‘modern industrial’ house style, a combination of sandblasting, brushing and laser engraving, before assembling and testing the movement. As with every movement to leave Breitling’s Grenchen headquarters, it is then shipped off to COSC for certification. The tested and COSC-certified movements are then delivered to Tudor, ready for casing.

The process is thought to work much the same in reverse, with Tudor modifying and decorating its MT5612 to Breitling’s B20 specification, which includes more traditional Côtes de Genève decoration and replacing the MT5612’s silicone balance spring with a more conventional replacement of Nivarox alloy.

While neither brand would comment further on the nature or longevity of the deal, the partnership would seem to be ongoing in the sense that all of the watches involved – namely the Tudor Heritage Chronograph and the Breitling Superocean Heritage II – are collection pieces rather than limited edition runs.

It is curious though that, after such refreshing transparency with the watch press at Baselworld, Tudor has opted to market the MT5813 to the public as being a ‘manufacture calibre’ when it more accurately the product of two manufactures. If the message is that 'manufacture' is no longer the be-all-and-end-all in watchmaking, then why muddy the waters with such a conflicting claim?

For Tudor at least [Breitling turned down an opportunity to comment] the arrangement would seem to be about offering functionality at the best possible price, the Heritage Chronograph is after all £3,430, a reasonable price for a chronograph from a major brand, undercutting even Omega’s famously keen pricing of its Speedmaster Professional.

“We’re not pursuing the in-house calibre for any reason,” confirms Chevalier. “For our three-hand watches developing our own calibre was the best possible way to bring that added value to the customer. In the case of the chronograph this has been a very interesting solution to go with, because we can bring to our end customer an integrated chronograph calibre with column wheel construction and vertical clutch at a price that’s ours and a movement that is not widely available on the market and one that is highly regarded.”