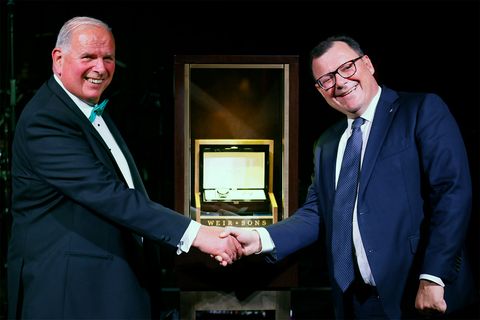 We meet Thierry Stern at Weir and Sons, to be precise; a jeweller on Dublin’s Grafton Street that has operated in one form or another for 150 years, and sold its first Patek Philippe well before the start of the Second World War.

Stern is in town to celebrate the retailer's 150th anniversary and to present the watch his family-owned brand has created to mark the occasion, a unique edition of Patek Philippe's platinum annual calendar chronograph, the ref. 5905P-014.

The suffix identifies the watch as part of Patek Philippe’s Special Series, an exclusive grouping of limited-run watches created to mark similar occasions as a reward to stockists and their customers. When people speak of the brand's good relationship with its retailers around the world, this is what they're talking about.

“Of course, I will not do it for everybody,” states the fourth generation CEO. “You have to have a long history, a specific anniversary, a good relationship. Weirs is celebrating 150 years - not every retailer has that kind of history.”

Weirs requested a specific dial colour of the 5905P, a verdant green befitting the Emerald Isle, and while the watch isn’t numbered, the 25 bespoke boxes created from Irish oak and inlaid with sterling silver and ancient Irish bog oak will be.

Stern admits, that aside from deciding upon the right shade of green, the most difficult part is always deciding how limited the run should be.

“You’ll please 25 people and [leave] maybe 200 unhappy,” he admits with a resigned sigh. “But it’s also part of the game. People have to understand that it’s rare; Patek Philippe does not produce a lot of watches, we can’t, and when we do something like this we have to bring out something that will last in terms of rarity.”

The question of supply and demand is particularly pertinent to Patek Philippe’s steel models in recent years. Demand for the 5711A Nautilus has reached such frenzied levels that waiting lists have apparently been closed for some time, having the knock-on effect of stoking demand for the Aquanaut.

“It took us too long to be at the level of gold and platinum. Look what happened to IWC in the past, they went down to steel and now they have a hard time to get back to gold. For Patek it’s simply not possible. So, steel watches are always set at a certain percentage - what it is we don’t say, but it’s not a big one. That’s why sometimes you have four or five years waiting time for the Nautilus. Aquanaut is a little bit less, but for sure the demand is there.”

Stern admits it is easier for him, as a shareholder in a family-owned company, to turn down the considerable extra revenue that releasing increasing numbers of a hit model would generate than it would be a regular CEO with shareholders to answer to, but does so to protect the brand.

He is also seemingly untroubled by the marked decline of Baselworld in recent years. “I think there were a lot of ‘tourists’ who didn’t come,” he mused. “In terms of professional people for Patek? Everybody came, so business was very good.”

Stern’s own Baselworld experience was in danger of being overshadowed as rumours spread that Patek Philippe might be up for sale.

“It’s the same every year,” he says, his tone suddenly exasperated. “The only difference is that this time it was [on] Bloomberg. Normally when those rumours happen, and they’ve been happening for 30 or 40 years, we don’t say anything and the rumour is gone, now that it was Bloomberg everybody thought it was serious. But there was nothing, just a rumour.

“Why should I? What do you think, it’d be ridiculous. If I’d had enough or if I was sick or whatever, I’d just step backwards, have a good CEO, that’s much easier. Next year you will hear it again and again, it’s part of the success also.

“The truth is actually that I’m buying Rolex - but don’t tell anyone!” he says, as a mischievous smile appears.