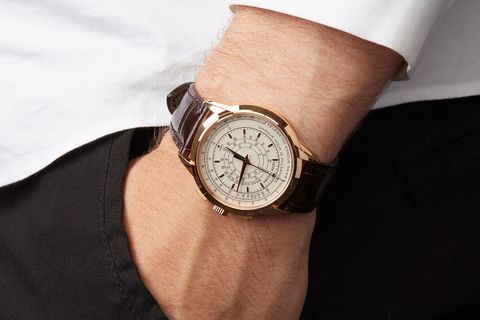 When Patek Philippe celebrated its 175th anniversary in 2014 it produced a number of incredible watches to mark the occasion, not least of which was the 5175 Grandmaster Chime mega-complication. There were also one-off repeaters and the usual superabundance of baroque engraving.

The watches which had everyone drooling, however, were the four different variations of the 5975, a multi-scale one-minute chronograph with no subdials whatsoever and a stepped-lug case design that has since entered the main Patek Philippe collection. The dial is one of those glorious creations that perfectly treads the line between tradition and modernity, and proves that when Patek gets it right, it really gets it right.

This week one has come up for sale at Xupes.com - a 5975R-001 in rose gold, to be exact - and it has caught our eye for one reason alone. Normally, although these are terrific watches, their presence on the secondary market is unremarkable (right now there are 49 on Chrono24 alone...). That's because Patek Philippe made 400 of each reference in yellow, white and rose gold, and a further 100 with a black dial in platinum. They're not exactly rare.

This one, however, is claimed to have been consigned from the collection of Eric Clapton, who most watch fans know is Patek collector royalty; a 2499 perpetual calendar chronograph he owned set an auction record of £2.3m in 2012. According to Xupes, it comes to them from a friend of Clapton. Priced at £84,999, it carries a hefty premium for its provenance; the going rate for a box-fresh gold 5975 is around £60,000. Like pretty much every other example out there, it looks untouched and comes with a full set of papers.

The 40mm chronograph is significant among Patek devotees not only for its unusual dial, which combines tachymeter, telemeter and pulsometer scales, but for the fact that it's an automatic chronograph (calibre 28-520) with a closed caseback. When new, it cost CHF 55,000, or approximately £82,500 by 2014's rates. So, what that provenance really gets you is a watch that's just about holding its value - we'd say that with 1400 others like it out there, you'll have to hold onto it for a while longer to see a serious appreciation, rock legend or not.