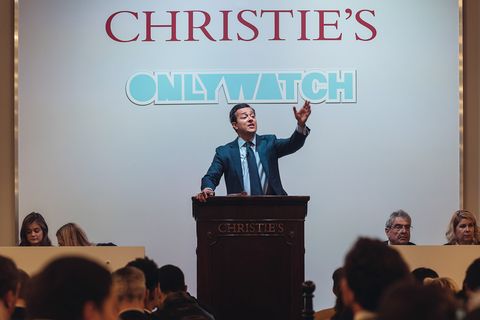 Most of the time in the watch world, competition is the name of the game. To those outside the business, it can be hard to understand: the jealousy with which each brand guards its own suite of historical firsts, lays claim to its own very specific set of criteria for greatness, and resists firmly the implication that it follows any kind of trend in the market, can be somewhat baffling when, on face value, the watches launched in any given year have more in common than that which divides them.

But indeed, every watch brand is permanently engaged in a somewhat isolationist PR strategy. Chief executives refer obliquely to "other watch brands", lest by speaking their competitors' names out loud they bestow them with greater power, like Voldemort, and the supremacy of the "in-house manufacture" mythos has erased from the popular consciousness the collaborative history of the industry. These days it is left to the smaller, connoisseur brands to work together - when Tudor and Breitling announced a swap deal for movements it was stunning in its openness and common-sense approach.

Of course, most industries are the same really. Yet you could be forgiven for expecting more fellow-feeling among the Swiss brands, given that their raison d'etre revolves heavily around their shared heritage. But there is one day, every two years, when watch brands from Switzerland and beyond come together and set aside their rivalries: Only Watch.

Set up in 2001 by the head of the Monaco Yacht show Luc Pettavino, the auction takes place every other year and held its first sale in 2005 - making the 2019 sale its eighth edition. The proceeds from the sale (at least 99 per cent of them, after basic admin costs are covered) go towards efforts to find a cure for Duchenne Muscular Dystrophy, a genetic condition that affects around one in 5,000 boys (it is incredibly rare in girls). There is no cure, and the average life expectancy once diagnosed is 26 years old. Pettavino's son was diagnosed with the disease in 2001, and passed away in 2016 aged just 21.

Related Story
Our favourite watches from Only Watch 2019

With no direct experience of the watch business, save for contact with the occasional brand sponsoring the yacht show, and a general exposure to the high-net-worth world, Pettavino nevertheless had the savvy to recognise that in the early 2000s, here was a booming industry that could speak to people's passions like few others. The auction scene was on the up, and the emergence of a new generation of wealthy collectors was fuelling the rise of a whole host of new brands. The watch industry was also not overburdened with existing charitable ventures.

With help from Prince Albert II of Monaco (it cannot hurt to have a friendly royal to make the introductions), he was able to secure an audience with several of the major Swiss brands, and after four years was able to host his first sale. With 34 watch brands donating a one-off timepiece, it realised a total of €1,907,000. The basic formula, whereby a watch brand modifies a watch from its existing collection to suit a colour theme that changes each time, was not then established; the sale contained a number of outlandish designs alongside barely-changed pieces from core collections. It was the only auction in which the top performing lot was not from Patek Philippe; that honour went to a Philippe Starck-designed Richard Mille, which sold for €285,000. By 2007, the tropes we recognise now were becoming established: the format of requiring each piece submitted to be totally unique is a simple one, and to Pettavino's good fortune, as Only Watch has grown and developed over time, it has coincided with an insatiable appetite among watch collectors for limited editions. The more limited the better, and if they come with a side of beneficence, so much the better still.

This year, Only Watch raised a total of CHF38.6m from the sale of 50 lots. Nearly all of that (CHF31m) came from one watch, the Patek Philippe 6003G Grandmaster Chime, but several other watches performed strongly - notably the Audemars Piguet Code 11:59 Openworked Tourbillon, and the F.P. Journe Astronomic Blue. Perhaps more importantly for the overall perception of the sale, nearly every watch sold for at least its low estimate. It wasn't always thus; in 2013, serious questions were being asked about the sale's ability to keep its watch brand partners happy, as both the 2009, 2011 and 2013 sales saw a large number of watches sell for embarrassingly small sums (comparatively speaking). A diamond-set Chanel Premiere Flying Tourbillon estimated at between €150,000 and €200,000 sold for €70,000, and a Christophe Claret X-Trem 1 Pinball (estimate: €230,000 - €290,000) sold for €100,000. Over the previous two sales, roughly a quarter of all lots failed to meet low estimate, with watches from Richard Mille, Bovet, Hermes, Chopard, Blancpain, De Bethune, Van Cleef & Arpels and others all performing poorly. The New York Times asked "How long can Only Watch afford to continue to surf on the Patek Philippe wave?"

In 2019 the percentage contributed by Patek was greater than ever; yet that figure is somewhat skewed by the incredible price achieved. The truth is that since 2013, Only Watch has figured out how to make its format work for all partners, whether their watch is selling for five figures or eight. From the 50 lots, only seven failed to exceed their low estimate, and there were prices achieved - for the likes of Hublot, Akrivia, Louis Vuitton or Montblanc - that were several multiples of high estimate for watches that, with no comment on their individual aesthetic merits, might have struggled in previous years.

What changed? Did the estimates get lower? They are in some cases (Tudor, Patek Philippe) almost comically low, but it does encourage bidding. Many blamed the poor marketing strategies employed by Patrizzi or Antiquorum in the past; certainly, under Phillips and Christie's, Only Watch seems to have done a better job of eliciting competitive bidding across the entire sale. You can point a finger at the overall climate of the industry, too - sales in 2009, 2011 and 2013 were sluggish generally as the financial crisis bit home, and the last three auctions represent something of a rally, at least at the very highest echelons of the market. Certainly it seems that watchmakers have confidence in Only Watch's ability to deliver: brands reported to have "abandoned" the venture after disappointing results, such as Hermes and MB&F have returned to see their entries sell convincingly.

The genius of Only Watch also lies in its apparent vulnerability. Pettavino has no signed contracts with any of the participating brands - their involvement is sealed with a handshake and powered by goodwill alone. Of course, the PR advantages of being seen to participate in an enormously successful charity fundraiser are obvious, but at the outset it wasn't guaranteed that Only Watch would become the phenomenon that it is today - and it says a lot that most brands stuck with Pettavino through the early wobbles.

Convincing the likes of Patek Philippe to take part can largely be attested to Pettavino himself. A sunnier disposition is hard to find - he springs from one press conference to the next, tidily and casually dressed in sweaters or Nehru-collared shirts and trainers, rarely wearing a watch of his own, but always wearing a suntan and a bashful, twinkling smile. But he's not boisterous, or booming, or grand, or pompous: in the context of the luxury world, there's an everyman quality to him that you would struggle to find in the boardrooms of the companies that have put him on the map. Neither tall nor short, he speaks softly but fluently, and with a humility that's infectious.

Certainly, there is no sign that Only Watch's parade of success has gone to his head. To date, the auction series has raised in excess of CHF 70 million, and in the past three sales in particular, has turned into something more than just another auction in November's run of sales. At this year's sale, we witnessed an all-out record, and several other stunning prices, but Only Watch has become a significant event on the horological calendar - and perhaps, another small contributor to, or beneficiary of, the decline of Baselworld's dominance.

Since 2017 it has been used by some participants as a test-bed for future releases: F.P. Journe in particular has broken with the normal pattern of tinkering with existing designs and used Only Watch to debut brand new complications which then appear, modified or reduced in scope, in series-produced watches. This year Breguet contributed a watch which is largely acknowledged to be a sneak peek at a 2020 commercial release in the Type XX family, while Voutilainen, MB&F and Urwerk (paired with De Bethune in the wake of a 2017 collaboration between Urwerk and Laurent Ferrier) all wowed with original designs.

You may decry the records set at the sales as artificial - to compare the chart-topping sale of this year's Patek Philippe 6003G Grandmaster Chime, which sold for £24.3m, a world record for any watch, with other humongous sales like Paul Newman's Paul Newman, or the Henry Graves supercomplication, is difficult because of Only Watch's charitable status - but the money is real. Would people pay the same at a 'regular' mega-auction? Almost certainly not; not for the few lots that make up the lion's share of the total realised, and definitely not for the relatively unexciting majority of the lots.

Nowhere else will a Tudor Black Bay sell for more than a hundred times its retail value; nowhere else will a Carl F Bucherer, a Maurice Lacroix or a Bell & Ross sell for the kind of money that normally buys ownership of a perpetual calendar from a top-tier brand. This kind of result can lead to cynicism, amplified by the fact that few buyers appear to be in the saleroom, and the tax-deductible implications of such large donations to charity. But I'll say it again: the money is real - and the sums at play, while enormous for watches, enormous for the researchers whose work is being funded, and enormous to the man on the street, are not so sizeable in the context of corporate budgets. Similarly, it's worth remembering that Only Watch 2019 drew a smaller total than Christie's sale of a single Hockney earlier in the year.

It says more about the watch industry in general - as mentioned above - that cynicism might be one's default response. But Only Watch has achieved something remarkable; it has got the very biggest of Switzerland's watchmakers to set aside ego and profit and take part in something where, regardless of the amount their watch sells for, they are not the star of the show. For that, Luc Pettavino deserves credit. And so it felt particularly appropriate when this year, two days before the all-star sale, he was awarded the GPHG's Special Jury prize where, to quote Aurel Bacs' address as the former Phillips auctioneer hailed him to the stage, "In a world full of competition, jealousy and division, he has succeeded in bringing people together."

Advertisement - Continue Reading Below
More From Watch Culture
Jean-Claude Biver's personal collection on display
How the fumé dial came back from the dead
Advertisement - Continue Reading Below
Every Omega James Bond watch ranked and rated
ClubQP 2019 Winter Showcase: the highlights
Nick Foulkes on... Chopard's Alpine Eagle
This could soon be the most expensive watch
Five great talks coming to ClubQP this November
Highlights of the Swatch sale at Philips next week
Understanding Patek Philippe reference numbers
Introducing ClubQP