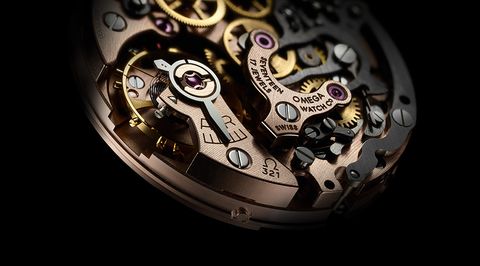 It's a small step for a brand, but one giant leap for movementkind.

Sorry - couldn't resist. As Omega winds up to exert Apollo 11 levels of marketing energy on the 50th anniversary of the moon landings (July 20th 2019 - put it in your diaries), it has announced that it is restarting production of the hand-wound chronograph calibre that was used in the watches of Armstrong, Aldrin and Collins on that historic mission. Indeed, the 321 was the calibre in all Speedmaster Professional Moonwatches used by NASA.

It was first produced long before man left earth's orbit, and long before the Speedmaster itself made an entrance in 1957. The 321 began production in 1946 and was the result of a collaboration between Omega and Lemania. Also known as Lemania Calibre 2310, it was used by esteemed names including Patek Philippe, Audemars Piguet, Vacheron Constantin and Breguet. It was used in some early Seamaster chronographs, before being selected as the calibre for all Speedmasters from 1957 to 1965 and all Speedmaster Professionals from 1965 until 1968, when production ceased and it was replaced by the calibre 861.

Key features of the 321 include its use of a column wheel rather than cam for switching chronograph functions, and a lateral clutch. These days most column-wheel chronos come with a vertical clutch, as it's technically an improvement, but the lateral clutch is nicer to look at in action. (Read our illuminating primer on chronographs from renowned watchmaker Peter Roberts for more details).

A 1964 Speedmaster, powered by Calibre 321
Courtesy

Omega has said that the new-generation 321 movements will be entirely faithful to the originals: specifically the second-generation 321 found inside Gene Cernan's Speedmaster ST 105.003 from the Omega Museum in Bienne. This watch was worn on the moon in 1972 as part of the Apollo 17 mission, and Omega's movement technicians have spent the last two years digitally scanning it to ensure the new models are faithful. It will be produced on modern machinery to modern tolerances, but we hear that it will be created in a dedicated workshop away from Omega's main production lines.

The press release concludes with the news that "watch fans can expect more developments and news in the coming months." Seeing as this is the anniversary year of the moon landings, something which surpasses even James Bond and the Olympic Games in Omega's universe, we would bet heavily on the brand releasing a commemorative range of chronographs powered by this calibre pretty soon. Get your credit cards ready, watch nerds...