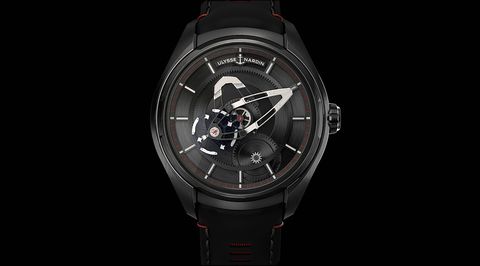 No watch straddles watchmaking’s past and future more dramatically than Ulysse Nardin’s Freak. First launched in 2001, it looks like something Captain Kirk would bring out for special occasions and yet has its roots in the 19th century, when a Coventry-dwelling Dane called Bahne Bonniksen first patented the carrousel tourbillon in 1892. A spoonful of horological Marmite, it has been a watch that, thanks to appearance and price, has often felt out of reach for a lot of watch collectors.

But now Ulysse Nardin has made its bid for the new, young watch connoisseur by making it easier to use and more affordable, relatively speaking, with the launch of the Freak X.

It still has the iconic “central bridge as time indicator”, made visible thanks to Superluminova indices and details on the bridge, and, like the Vision, doesn't have a dial or hands. However, it is smaller than its predecessors – 43mm as opposed to 45mm - and has ditched the bezel-based time correction, which was a feature of both the Out and the Vision, in favour of a more pedestrian crown.

Powering it is the new UN-230, which is a mash up of the UN-118 and the Freak Vision UN-250. The former was the brand’s first movement with a DIAMonSIL escapement – a material made from silicon and man-made diamond that Ulysse Nardin created in collaboration with Sigatec, a micromechanical silicon component company based in Sion, Switzerland. The latter was introduced last year and, thanks to its innovative gearing system, which the brand unfortunately named Grinder, it made the Freak automatic for the first time, which the X is also. It is also the movement from which the X gets its super-light silicon balance wheel with nickel flyweights and stabilising microblades.

You can have the Freak X in all the usual material suspects – titanium, rose gold or black DLC – but if you want to really go cutting edge then opt for carbonium.

Light and sustainable, carbonium is used by the aeronautical sector for the fuselage and wings of the most up-to-date airplanes. This innovative material is made from offcuts from other aeronautical pieces, which makes it 40% less impactful on the environment than other comparable materials, and features carbon fibres of just seven micrometres in diameter – pretty impressive when you consider the average human hair is about 17 micrometres. It is robust yet ridiculously light and, thanks to the way the fibres create their marbling effect, each case pattern is unique.

All this technological wizardry could be yours for just CHF24,000 (if you opt for the carbonium), which does seem reasonable when you think that the Freak Out starts at CHF48,000, while the Freak Vision clocks in at CHF108,000. Getting Freaky has never been so tempting.