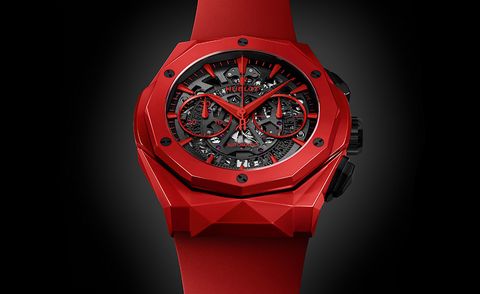 Sports stars are, by and large, a watch brand’s default celebrity category when searching for ambassadors. From tennis and football through athletics, golf and even triathletes (thank you, Breitling), there is no sport without a sponsored wrist in it somewhere.

Hublot is one brand that casts its net a little wider – in the past it has collaborated with street artists, tattooists and concert pianists. And now it launches its second collaboration with renowned Pop-art phenomenon Richard Orlinski.

Orlinski, whose moniker of “the sculptor who breaks the rules” makes you wonder whether he should have teamed up with a certain Le Brassus-based brand instead, is a Parisian sculptor – now with a sideline in music – who, in 2004, devised his Born Wild concept. It claims to explore the relation between instinct and civilising emotional forces by creating boldly coloured sculptures of animals in heavily faceted materials such as stone, glass and aluminium.

One of his most iconic pieces, and arguably the one that started it all, is a crocodile in a very intense red; a red that just happens to be the same as one as a ceramic Hublot had been working on and which debuted at Baselworld last year in the form of a Big Bang Unico case.

Four years in the making, creating a ceramic in this particularly vibrant shade was only possible thanks to the development of a new manufacturing technique that fused pressure and heat in such a way that they were able to sinter the ceramic without burning the pigment; it also had the added bonus of making the material harder (1500HV as opposed to 1200HV on the Vickers hardness scale).

This hard, red ceramic had to be modelled before being cut, in order to mimic the three-dimensional folds that are a signature of Orlinski’s style; it then had to be mirror polished to achieve a look that mimicked Orlinski’s trademark facets. Combine this 45mm facet case with a red rubber strap in exactly the same shade and you’ve got a very eye-catching piece of wrist candy indeed.

Once your eyes have recovered from the red overload, you’ll be able to turn the watch over to appreciate the classic HUB 115 skeleton chronograph movement powering the piece, which was first unveiled when the brand launched the Classic Fusion Aerofusion Chronograph back in 2013.

Just like Orlinski’s art, this is a bold, brash design that won’t be for those who like their watches to complement their wardrobe not dictate it. But then if you’re after that sort of thing, you’re probably not in the market for a Hublot in the first place.