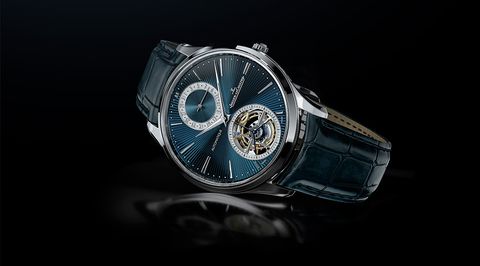 There are times as a watch journalist when you have to stop and wonder how far removed your critical favourites are from the commercially successful products. Can it really be that the slender, attractive, elegant watches we dote on are so universally rejected by the great watch-buying public?

How else to explain the appearance of the Vacheron Constantin Fifty-Six, the replacement of Audemars Piguet’s Jules Audemars collection with the Code 11.59, and now this, the introduction of a certain butchness to Jaeger-LeCoultre’s Master Ultra-Thin?

This is not perhaps quite in the same category as the first two in that list, and yet it hails from the same basic impulse. Sleek and simple round-cased watches from premium brands just aren’t selling, or so it would seem.

The white gold tourbillon model uses the brand’s in-house calibre 987, which it says has been reworked technically and aesthetically. No specific details have yet been released but judging by the case back, that would include a new streamlined tourbillon bridge.

On the dial, the large tourbillon aperture is balanced by an equally emphatic circular date indicator at 12 o’clock, which is new to the brand. The case is identical to the existing Master Ultra-Thin Tourbillon, measuring 40mm across and 11.3mm thick.

There’s a problem here for me - I’ve mentioned it before and I’ll say it again until something changes: this isn’t ultra-thin any more. You might rightly argue there is a difference between the pieces designed specifically to push boundaries like Bulgari’s Octo Finissimo and watches intended to be made in low volume series production. Nevertheless, the persistent use of the prefix “ultra” smacks of a triumph of marketing over substance and if you think that sounds petty, perhaps it is, but it gets right to the nub of what many perceive as the root of the problem at Richemont’s prestige brands.

At the time of writing, we haven’t handled the watch up close. All previous experience points towards the expectation that, whatever you think of the idea, Jaeger-LeCoultre’s teams of watchmakers, technicians and craftsmen can execute it with superb skill. It will be a shock if the dial and enamel aren’t flawlessly sharp and rich in colour, and the movement appears to be pretty as a peach.

Early signs are that 2019 may be the ground for a vigorous defence of tourbillon watchmaking on the part of the major brands. They occupy a special place in the horological landscape, anachronistic even by the standards of luxury watches. If this indicates renewed vigour in their target markets, and that ensures the continued prosperity of JLC et al, then watch fans everywhere will be pleased. But taken on its own, this watch will do little to change the assessment of this great brand’s fortunes.