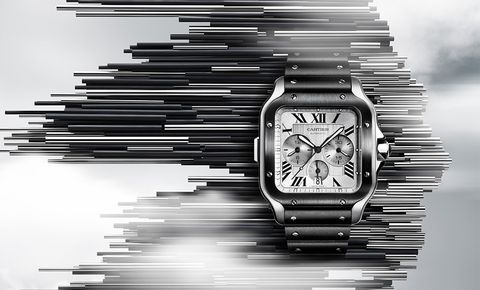 As iconic watches go, the Santos is up there in the pantheon of greats. First launched in 1904 and designed for pilot Alberto Santos-Dumont, it has the dual legacy of being the first purpose-designed wristwatch and the first pilot’s watch.

Last year, Cartier decided to give the this classic an update. It gave it some curves thanks to the bracelet and case integration and introduced its new SmartLink and QuickSwitch concepts. The former refers to a section of links that can be added or removed at home and the latter to the method of switching the strap in its entirety – concepts which were nearly three years in the making. This year is all about extending the family. There’s the new high-efficiency quartz-powered homage to the original – the Santos-Dumont – but the real talking point is going to be the Santos de Cartier Chronograph.

Cartier is relatively new to the in-house chronograph game – its first was launched in 2013 in the Calibre de Cartier Chronograph. Although the watch was easy on the eye, what everyone was talking about was its power source – the 1904-CH MC. This is the Carole-Forestier designed column wheel chronograph fitted with vertical coupling and linear zero resetting – it uses a hammer mechanism to ensure that the chronograph is reset with the ideal amount force however hard or soft you press the button.

From the press release, this shows the Santos Chronograph will be available in a full range of metals and straps
Courtesy

And it is this impressive piece of kit that you will find in the Santos de Cartier Chronograph. If you want any more reasons to buy this effortlessly cool timepiece, then we can tell you about the new folding buckle, the discreet chronograph push button at nine o’clock and the two bracelets– one black leather, the other in a menacingly sophisticated dark steel. The latter being our preference if only for the way it appears to flow in an almost molten fashion from the darkened bezel of the frankly superior all-steel version. But really, it’s all about the movement.

Another talking point but for far more whimsical reasons is the Santos Squelette Noctambule; a skeleton Santos with the steel bridges coated in Superluminova; an effect that turns the bridge work into a luminescent spider’s web when night falls. Cartier has dabbled with this particular trick before with a Tank back in 2006, however that never made it past prototype stage and became a unique piece for the Cartier collection.

Obviously, Cartier has used the intervening 13 years to improve this particular technique because this Noctambule will be available to the public from June this year. Cartier’s reasoning for adding this to the Santos collection was because on June 24 1903, Alberto Santos-Dumont flew at night, guided by a spotlight fixed on the ground.

The Noctambule: not guaranteed to protect against storms of metal rods
Courtesy

So, with this watch, Cartier has created a new skeleton Santos that could have been worn during that night flights. We’ll leave it to the pilots out there to pass judgement on that.