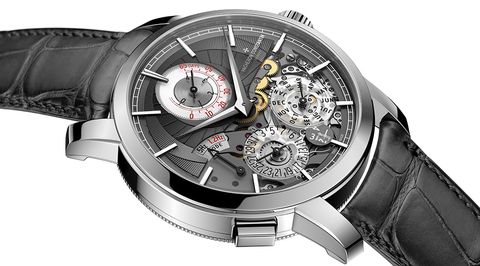 Re-setting a perpetual calendar that has exhausted its power reserve has traditionally been a bit of a nightmare. After all there are leap years, years, months, days, dates and time to consider. Of course, the advent of quick-set correctors simplified matters somewhat, but who carries that pusher tool around with them or, heaven forbid, might even be tempted to use the nib of a biro instead?

Wouldn’t it be better if, instead, your perpetual calendar was very unlikely to ever run down at all? That’s certainly the position that Vacheron Constantin has taken with the development of its incredibly innovative Traditionnelle Twin Beat Perpetual Calendar revealed at SIHH 2019 in Geneva.

Vacheron’s solution is a movement with two different balances, the Calibre 3610, which operates either at a high-beat 5Hz (36,000vph) frequency or an extremely leisurely 1.2Hz (8,640vph). The biggest noticeable difference between the two is the resulting power reserve; the Twin Beat can run at 5Hz for four days on a full wind, but use the pusher at eight o’clock to switch instantaneously over to 1.2Hz and the watch will run for 65 days. Yes, that’s more than two months on a single wind using the same single mainspring barrel.

Vacheron has previously created a 14-day movement, however it used four separate barrels to achieve it. A. Lange & Sohne achieved a 31 day power reserve with two mammoth mainsprings that require a key to wind them. Hublot even managed 50 days with its MP-05 LaFerrari, but that linked up a total of 11 barrels. Not only does this new Vacheron Constantin take the wristwatch power reserve crown in style, it achieves it with a single barrel thanks to the ultra-low frequency oscillation of its balance and a torque-dropping differential.

Vacheron envisages the Twin Beat to be run at 5Hz (known as “Active” mode) when it is being worn and switched to 1.2Hz (“Standby”) when it is not on the wrist thus extending, to the greatest possible degree, the length of time the watch can go unattended without losing accurate calendar settings. The brand was apparently inspired by Japan’s notoriously complicated Edo-period calendars where day and night was divided into six segments which varied from day to night and season to season. Clocks of this period often used double balances to navigate the complex changes. It also appears to have covered all bases by including correctors on the caseband so re-setting will be a breeze if you forget about your six-figure perpetual calendar for more than two months.

According to the brand, the Twin Beat is the first time it has strayed outside the fairly standard range of oscillator frequencies (namely 18,000vph – 28,800vph) which lead Vacheron to go back to basics with an in-house R&D project exploring the fundamentals of mechanical timekeeping regulation.

As a result, an incredibly fine hairspring was developed for the Standby balance, with a cross-section comparable to the finest human hair (0.0774mm by 0.0159mm in case you were wondering) which is four times smaller than that of the spring used for the Active balance.

It is perhaps not surprising that this movement of two halves also puts differentials to good use as well. The first is used on the mainspring to lower the output torque when the Standby balance is engaged, while the second ensures that the motion works is engaged with whichever of the movement’s going trains is currently active.

A completely new ‘sprung dual-gear compound’ system has also been devised to negate the negative, power-intensive influence of jumping indicators for date, month and leap year within the perpetual calendar. The new approach requires four times less torque than traditional jumping systems and, as a result, Vacheron reports negligible effects on the balance.

All of this has been packed into a 480-component movement just 6mm high and 32mm in diameter, here it is encased in platinum, in a watch which is given a modern aesthetic that’s a bit of a radical departure for VC. At first glance it’s not dissimilar to the high-end models produced by Montblanc, but we will see how it differs up close, no doubt. Simple radial guilloché, sandblasted matt black finishes and sapphire subdials combine for a contemporary, intricate, yet unfussy appearance.

Vacheron’s dedication to the cause of wound down perpetual calendars is admirable, and it’s certainly an impressive feat of watchmaking, but the extent to which it has got its teeth stuck into the project does feel somewhat akin to using a sledgehammer to crack a nut.

We’re not entirely certain why the 5Hz balance is required at all. Oscillation frequency makes a difference to the precision of chronographs, but this is not a chronograph. Hi-beat movements are also prized for the smooth sweep of their second hand, but the Twin Beat doesn’t have a second hand. Would a movement running solely at 1.2Hz have any practical drawbacks we’re not spotting? One assumes it would deliver quite patchy daily accuracy (although not enough to throw the date out, which might be the point) but do potential customers consider that a major purchasing factor either way? We’ll enquire with Vacheron at SIHH and report back.

The Traditionnelle Twin Beat Perpetual Calendar is exclusive to Vacheron Constantin boutiques and is priced at £195,000.

UPDATE: We posed the question to Vacheron Constantin’s development team at SIHH and the answer makes us like the Twin Beat even more than we did before. As we suspected the 1.2Hz escapement would not run accurately on the wrist over the course of 65 Days, it needs to be laying flat and stationary for that. But there is also a relationship between the two operating frequencies, Vacheron having experimented with a variety of different possible pairings before arriving at 1.2Hz and 5Hz. The mainspring torque required for the 5Hz escapement worked best in feeding the 1.2Hz escapement after the step down differential both in terms of power reserve and isochronism. The Twin Beat really was one of the most interesting watches at SIHH this year.