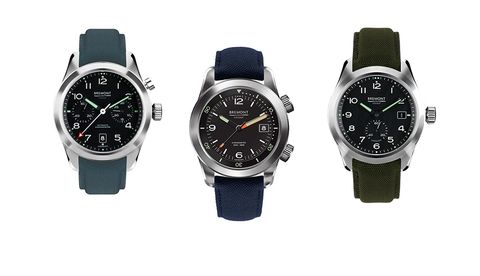 The military history of wristwatches is well-documented, and yet it is still worth pausing to reflect - in today's luxurious claims - that whether you're wearing a Hublot or a Hamilton, the watch on your wrist might not be there at all were it not for the exigencies of global conflict. For today's watchmakers, a marketable connection to the original watches worn by troops, pilots or divers is gold dust (a la IWC, Panerai or even Vertex) but there are other ways too, as Bremont has demonstrated.

Over the past decade it has built a hugely successful sideline to its main watch business, customising the core ranges and offering them for sale exclusively to serving personnel. Bremont Military makes up some 40 per cent of the overall business, and can be credited with helping the brand expand into the USA. Now, it has signed a deal with the British government that establishes the brand as the "official luxury watch partner to Her Majesty's Armed Forces", and released three watches - Broadsword, Arrow and Argonaut - that is says are the first Bremont Military watches available for sale to the general public.

For me this is a bit of a non sequitur, as by definition Bremont Military feels like it should refer exclusively to the watches not available to the public, but you say tomato and all that. The partnership entitles Bremont to exclusive use of the British Army, Royal Navy and RAF insignia, so each watch comes with a closed caseback engraved with all three and the motto "approved by Her Majesty's Armed Forces". The watches - at least in their stock form - are not being supplied to the military, but all are follow design templates of tried-and-tested service watches. One last note before we get to the watches themselves: the word "luxury" in the deal means that cheaper, predominantly quartz watches from the likes of CWC can still tout their own military connections.

The Broadsword - the watches are unusual for Bremont in each model having their own names - is the simplest of the three. It's the army watch, and cleaves pretty faithfully to the Dirty Dozen field watch aesthetic: clear Arabic numerals, luminous hands and small seconds at six o'clock. On the dial, as with its two siblings, the only sign this is anything different are the initials HMAF under the brand logo. Probably the big news with this watch is that it is cased in a simpler, slightly, thinner 40mm case design - still water-resistant to 100m - rather than Bremont's signature three-piece "trip tick" case. This, and the closed caseback, helps to keep the price down to £2,595. The watch runs calibre BE-95-2AV, a modified ETA calibre with 38 hours power reserve running at 4Hz.

Lastly, the watch created in connection with the Royal Navy is the Argonaut, a supercompressor-style diver with an inner rotating bezel. It's housed in the same case as the Arrow chronograph, but is rated to 300m water resistance instead of 100m. This watch uses a different handset, with thicker, more legible hour and minute hands (the latter in orange). The crowns are what you would have to call oversized, almost resembling "onion" crowns from heritage pilots' watches, but that does make for very easy use. It's priced at £2,795.

The move is a pretty logical one following Bremont's trajectory to date. It is marketing, yes, but that's not a sin and if pushed I don't think the brand would claim it as anything else. Bremont has a proud history of supporting military charities as well as its business supplying custom watches to servicemen and women, and I don't think it's an unnatural fit in the slightest. Whether the MoD needs a "luxury" watch partnership is another question but there are far more egregious brand partnerships out there.

There has been some confusion about whether these are intended as service watches: they are not, and Bremont is pretty clear on that. If members of the armed forces buy them, that's great - and the brand expects that many will - but at no point have these been presented as equipment for use in active duty. Like all Bremont watches, they will be eligible for purchase by specific units under the Bremont Military aegis.

When it comes to the design, I think all three play it pretty straight down the line. Elements of personal taste arise: common to all three watches are outlined date windows which have drawn criticism in some quarters; personally I'm not offended by them but for many, drawing attention to the date window is a step too far. I find the handset on the Arrow and Broadsword a tiny bit small, but it's partly down to the lume inserts, which make them seem smaller than they are.

It will not have escaped your attention that both play an uncommon similarity to Vertex's M100 and MP45 but production timetables being what they are, it's hard to draw any connection between the chronographs, and in the case of the Broadsword/M100, it's more a case of common ancestry; Vertex was one of the original twelve WW2 suppliers, and, we understand, has the proper dispensation to use the 'broad arrow' logo on its dials.

A final thought: in these, in Bremont's other 2019 watches and in the brand's recent releases generally, it's possible to observe that design and partnerships are by far the most fertile grounds, rather than technical development. That's not wrong per se, and I'm aware of the cost and time taken to produce either new complications or other technical improvements to a watch. But, given the area Bremont is playing in - tough, tool watches (or at least, the luxury equivalents) - I would say one eye needs to be kept on telling that side of the story, as well as the important business of keeping the collection fresh. A properly in-house movement, co-developed with Stephen McDonnell, is still in the works and may break cover before the year is out. That would lend much-needed impetus to Bremont's charge.