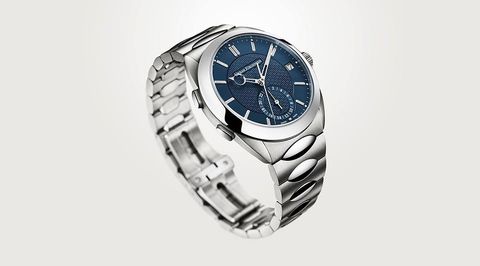 Isn't it nice when something comes along to stop you in your tracks? Today, the something in question is a new watch from everyone's favourite Danish-Swiss haute horlogerie brand, Urban Jurgensen. It is called the Jurgensen One, and what's arresting about it is the fact that, in a total first for the brand, it appears to be a luxury sports watch in the Royal Oak/Nautilus mould.

I say 'appears to be' because information on this watch is currently scant; pictures have been posted on Facebook by one of Urban Jurgensen's US retailers but no official release has yet been issued by the brand. But here's what we do know: it is cased in stainless steel with an integrated bracelet design, will come in three dial colours (silver, grey and blue) and two models: an automatic and a GMT (which is currently only available with a blue dial).

Inside the watches is a new automatic calibre, evolved from the in-house P4 (developed with Chronode) and bearing the name P5. The P4 is a 3Hz movement with 60 hours of power reserve when fully wound, and we can't see a clear reason why that would have changed in the addition of an automatic rotor. It uses a standard Swiss lever escapement rather than the detent that Derek Pratt helped to develop for UJ, and as you can see, the calibre is finished with radial stripes emanating from the centre of the balance wheel. The rotor is openworked to show as much of the movement beneath as possible.

The case construction has a certain thickness to it, reflecting the need to accommodate the automatic movement, and while we will reserve full judgement for when we see these in the metal at Baselworld, it doesn't look like the thickness is too extreme. We also don't know for sure how wide the watch is; based on the P4 calibre's 32mm width, I'd say the watch is going to be around 40mm-41mm. The end links look as though they have been designed to accommodate quick-release spring bars, leading to the idea that we could also see this watch on other material straps. Would UJ go as far as a rubber strap? Who knows.

On the dial, Urban Jurgensen has done a clever job of retaining its identifiable tropes - a fondness for guilloché and the three-piece Breguet hands - while translating them for a watch with a very different overall presence from its usual dressy fare. On the GMT, pictured above, the skeletonisation of the hands really comes into its own (the remaining solid elements are lume-filled, which I believe is also a first for the brand). Speaking of Breguet, there's something of the Marine about that blue dial, too. The GMT function is executed via the subdial at 6 o'clock, using the pushers at 8 and 10 to set the second timezone. Elsewhere we've got a date at 3 o'clock and polished, lume-filled hour markers with what look like they could be lume dots in the minute track as well.

Certainly the overall aesthetic of the watch - specifically, those oval shaped polished centre links and the retention of the brand's signature guilloché dials - position it at the dressier end of the sports-luxe spectrum, if there is such a thing. More Vacheron Constantin Overseas than Piaget Polo S. It's also priced closer to the likes of Vacheron Constantin and Audemars Piguet: the automatic is set to cost $26,950 and the GMT $36,850.

The devil will be in the details with a bold launch like this: how finely is the case and bracelet finished? Does it have the heft, crispness and textural contrasts of a Nautilus or Overseas? But at first sight, and trusting Urban Jurgensen to execute it as well as it does its other watches, I feel confident saying I expect this to be well received.