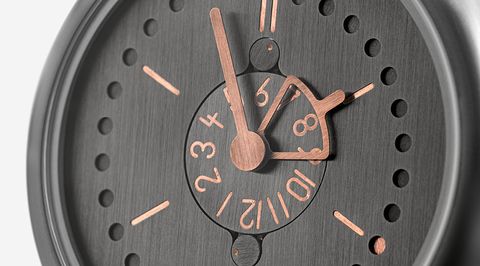 The man behind Ochs und Junior describes his work as the opposite of haute horlogerie which, if all you had to go on were these images, might be a fair assumption.

In reality, Dr Ludwig Oechslin is known for condensing the complex, taking the technical and making it seem intuitive. In essence, at Ochs und Junior, he does the number crunching calculations so you don’t have to and presents his creations in a stripped-back, industrial style free of the usual horological trappings.

His latest watch, Two Time Zones + Date (the naming conventions are equally as matter-of-fact), displays the time, running seconds, date, second time zone and a power reserve in a manner that is so covert that you would be able to ignore the majority of the information altogether were you not looking for it in the first place. It’s a very clever design trick.

Hours and minutes are displayed by means of two central hands with indices at the 2/4/6/8/10/12: so far so logical, but the hour hand is shaped like the speed control of a steam ship (or chadburn) with a window that frames any one of 12 numerals printed on an adjustable disc beneath. This gives you the second time zone.

Above and below the disc are two far smaller discs, a simple power reserve at the 12 o’clock and a running seconds at the six.

The date is displayed by means of 31 holes punched in the surface of the dial with a dot of contrasting colour moving beneath. To give you some chance of being able to ascertain the date quickly 1st-30th run the full circumference of the dial, with the 31st overlapping. This allows you to fairly quickly extrapolate the date based on its position (you can also read holes as even numbered minutes and gaps as odd should you wish to double up on markers) and creates the beginnings of a spiral, which Ochs und Junior has embraced as a signature of the brand.

While Ochs und Junior have already produced a second time zone watch before (although without the other ancillary complications) that watch used an ETA 2824-2, this new 42mm watch uses Ulysse Nardin’s UN-118 automatic, which is far more fitting given Oechslin’s role in the rebirth of Ulysse Nardin.

Oechslin proved himself studying the fiendishly complex 18th century Farnese astronomical clock at the Vatican before imbuing a nascent Ulysse Nardin with unbridled technical creativity in the early 1980s that led to the creation of the famed Trilogy of Time watches.

Ochs und Junior makes only 130 watches a year which are sold directly from the company’s Lucerne workshop by co-founder Beat Weinmann. Of that number, only around 10 will be dual time pieces and as such they are made as bespoke pieces with a bewildering array of material and finishing options.

The brand’s online customiser is an excellent way to lose a couple of hours with case materials including titanium and sterling silver and a kaleidoscope of colour options available for dials and indices. Available here with prices starting at CHF 9,000 + tax