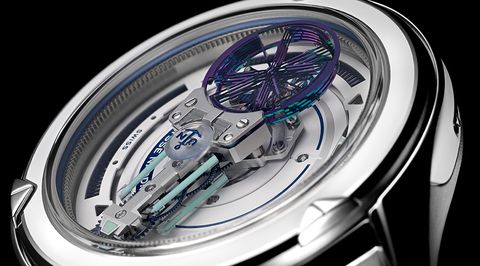 Ulysse Nardin has revealed details of its latest developments in silicone, fittingly in a concept watch that also marks the next stage of the famed Freak model, the first wristwatch to use a silicon hairspring when it launched in 2001.

Freak neXt swaps a traditional hairspring for a four-layered silicone structure with no physical pivot point which incredibly, given its dimensions, is manufactured as separate layers and assembled by hand using silicone spacers. The fifth attached layer is the balance wheel.

Ulysse Nardin’s research and innovation director, Stéphane von Gunten has been working, on and off, on the development for a decade, filing the patent in 2009.

The project relies on the physical properties of ‘compliant mechanisms’ or structures designed to allow for elastic deformation which then return to their original shape. One such mechanism is currently monitoring seismic activity on the surface of Mars.

This is not the first time we’ve seen compliant mechanisms used in watchmaking. In 2017 Zenith’s Defy LAB saw a single silicone disc replace the traditional functions of balance wheel, hairspring and anchor.

“Zenith decided to have a low amplitude on a single layer,” explains von Gunten. “Something compact. The reason we have the extra layers is to get more amplitude and to work with a normal escapement, the idea is to replace the end, the normal balance wheel and hairspring, with this oscillator, so it could sit with different kinds of calibres.

“If you want to work with a normal escapement, the amplitude of the balance wheel has to be higher than the lift angle. If we were to use one single layer the amplitude would be something like 10-15 degrees and that’s not high enough so this is why we have to use multiple layers to work correctly with the escapement.”

Like the Zenith, this new oscillator at the heart of the Freak Next is high frequency (12Hz as opposed to 15Hz) whereas more common metallic hairsprings operate at frequencies between 2.5Hz and 4Hz. While the precision of Zenith’s solution is fixed once manufactured (and Zenith claimed it to be the most accurate mechanical watch in the world) von Gunten’s concept can be regulated in a fairly traditional manner with four fixed mass elements and four adjustable mass elements.

Plenty of lume inside and out, although this watch is not for sale
Ulysse Nardin

While the Freak Next currently operates to COSC-levels of accuracy (-4/+6 secs a day, although without a conventional hairspring, the movement could not be submitted to COSC for testing) von Gunten knows he will have to improve upon that if he is ever to get the concept to market.

“The use of this kind of oscillator needs a [reason for being] and the sense is to reduce friction to increase performance.” He muses. “You can increase the frequency, you can increase the power reserve but, at the end you need accuracy and, if possible, accuracy over a long period of time.”

The intricate hand assembly method, which currently involves the minute components being glued together, would also need to be industrialised.

“In the future we hope to be able to assemble using a soldiering process or thermal oxidation and then it will be more scalable and we’ll be able to reach higher quantities. So for now, it’s a concept watch, it’s really close to production but we’re not ready to make thousands of watches like that.”