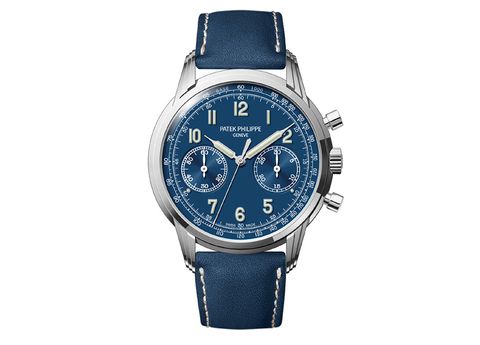 New for 2019 from Patek Philippe is reference 5172G, a white gold chronograph with blue dial that builds on the basic template of the 5170 while moving things on somewhat in the design department.

The 5170, Patek's core chronograph reference - successor to the much-loved 5070 and up there with only a handful of other in-house, haut-de-gamme hand wound chronograph references - has now been discontinued. Since 2018, it had only existed in one reference, a platinum-cased model with diamond hour markers, the gold-cased models having already been phased out - a typical sign that the brand is about ready to move things on.

And this is what we're moving onto: reference 5712G.

As the number implies, it's an evolution of the 5170, and an aesthetic one only, as it shares the same calibre - CH 29-535 PS - a hand-wound movement with a 30 second register at 3 o'clock and running seconds at 9 o'clock. It combines a column wheel with a horizontal clutch, beats at 4Hz and has a 65 hour power reserve. It's not as flamboyant as chronograph calibres from A. Lange & Sohne or even Montblanc, but it's still beautiful and finished with aplomb.

The design, while new for Patek Philippe's chronograph family, will be familiar from 2017's perpetual calendar reference 5320. The standout features are triple-stepped lugs and syringe (or pipette, if you prefer) hands. These, along with the Arabic numerals, are luminova-filled - something that was also introduced on the 5320.

Elsewhere, the tachymeter scale has been tweaked slightly, and we have a new shade of blue on the dial, accompanied by a blue calfskin strap with contrast stitching. Something you won't notice from these pictures is that the watch also has a distinct "glassbox" sapphire crystal that sits up proud of the bezel.