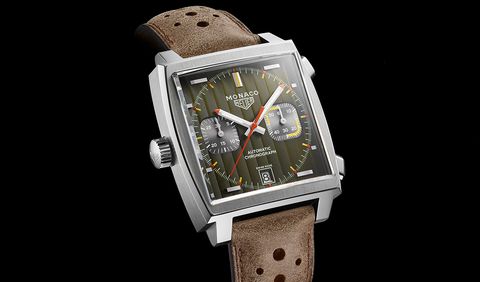 Of all the watches launched in the auspicious year for watchmaking that was 1969, the Heuer Monaco remains the most avant-garde. Seiko’s Astron might have done the most to transform horology, but even that was perfectly conventional in its styling.

Having battled to be among the first to launch an automatic chronograph, Jack Heuer was keen that the watch chosen to house the Calibre 11 would be something that stood out against its one-time collaborators, soon-to-be-competitors (Breitling and Hamilton) as well as Zenith and Seiko. Jack Heuer found a radical new case design courtesy of manufacturer Picquarez; it was also the first properly water-resistant square-cased watch on the market.

What was created stood out against just about every watch on the market, and still does -but the Monaco’s best years have arguably come in the modern era. While it’s impossible to say how it would have fared had it not benefited from the huge PR coup of appearing on Steve McQueen’s wrist in the 1971 film Le Mans, the Monaco was nevertheless only in the Heuer catalogues for six years, being replaced by the Silverstone in 1975.

Fifty years later, it is regarded as an icon, thanks to the wholehearted commitment TAG Heuer showed to its relaunch in 1997 and the steady flow of commemorative editions over the last 22 years. And this year, to mark five decades since its first appearance, there will be five new Monaco models.

The first is this: a green-brown dialled limited edition with orange and yellow accents; a two-register chronograph with the recognisable left-hand crown and off set chronograph pushers, authentic to the original Monaco. Typically for the “Heuer Heritage” range, the watch bears an old style Heuer logo, and is engraved on the caseback with the same logo.

This watch is deliberately designed to evoke the 1970s; implying that the remaining four will take their styling cues from the 80s, 90s, 00s and 10s respectively. Inside is the updated version of Calibre 11, running at 4Hz with a 40-hour power reserve.