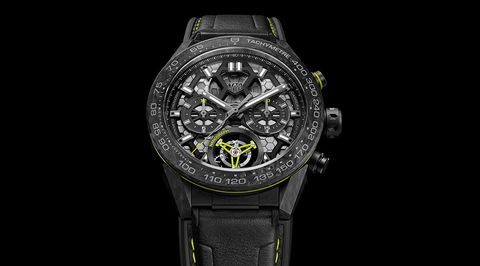 Just when you thought pure carbon was restricted to the more structural aspects of watchmaking – cases, baseplates, bezels, dials etc. – TAG Heuer is straight off the Geneva 2019 blocks with a tourbillon that potentially proves its mettle for all manner of tricksy mechanical components. In this case, the tricksiest of all: the balance spring. Visible here, in black of course, ticking at the heart of a tourbillon.

And to think you thought silicon was still impressive.

The acid-lime accents and groovy dial texture of the Carrera Calibre Heuer 02T Tourbillon bring to mind TAG’s inaugural adventures with Aston Martin last year, but the openworked hexagon motif is for good reason: it’s the molecular arrangement of pure carbon atoms, in both of the crystalline forms that make up the spring’s composite. Namely, cylindrical ‘nanotubes’ and their unrolled, sheet-form ‘graphene’ allotrope.

Graphene, you may remember, was 2017’s muse for Richard Mille, given its automotive partnership with McLaren and their own connection to the University of Manchester’s Nobel-Prize-winning carbon boffins. But more interestingly in this case, it’s that year’s other haute-tech headliner, Zenith and its Defy 21 that’s a more salient comparison.

The resulting Defy 21 was not only remarkable for its pricepoint (just £10k or thereabouts) but also its bizarrely unheralded carbon-hairspring technology, present in both the 5Hz timekeeping and 50Hz timing escapements. And now, it’s clear why: Zenith was to repay TAG for its 50Hz favour with proven, properly hype-able carbon componentry.

Like silicon parts, Zenith’s carbon hairsprings are made with a photolithography process, but one that grows the parts on a silicon wafer, rather than etching them from one. A complex series of chemical and gaseous baths and reactions grow the composite at a molecular level to give it outstanding flex characteristics.

LVMH could neither confirm or deny direct comparisons between the two brands’ springs and respective manufacturing processes, but suffice to say it’s a path worth following, as TAG’s establishment of an in-house carbon-composite balance-spring manufactory at La Chaux-de-Fonds – announced at the same time as the Heuer 02T Tourbillon Nanograph – implies.

And for good reasons too – much in the same vein as silicon, only… well, better. For a start, a lightweight, low-density carbon hairspring is virtually unaffected by gravity and shock. In TAG Heuer’s lab, watches were tested up to 5,000G (in reality, a 1m fall down onto a hard surface) where metal hairsprings bent and silicon hairsprings broke, while the carbon composite hairspring remained completely intact.

Like silicon, carbon springs give you antimagnetism, perfectly concentric oscillation and come with the ‘collet’ axis attachment integrated into the mon-structure. But it’s the toughness of crystalline carbon that’s the main draw over silicon – still avoided by purist watchmakers for its brittleness. And given TAG Heuer is a sporting watchmaker (tourbillon fussiness aside) this makes carbon balance-assemblies a particularly sensible way forward.

Update - Having spoken to TAG Heuer's newly-appointed Product Director Guy Bove (previously of Chopard and responsible for Breitling's recent re-brand), the implication is that having invested in the technology over the last four years, there are few serious barriers to this eventually being rolled out across much of TAG Heuer's range. Expect this story to develop over the course of this year!

The TAG Heuer Carrera Heuer02T Tourbillon will retail at £20,750.