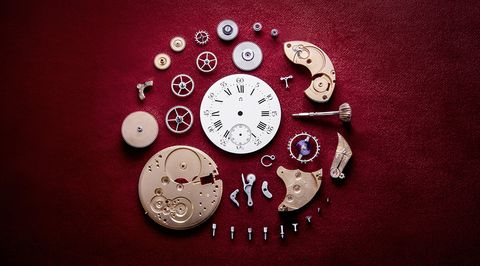 To celebrate the milestone, Omega revealed two very different watches at the Omega Museum in Bien last week. The launch event was also noteworthy as the final event to be held at the existing Omega museum before it moves to a new, far more modern space as a result of Swatch Group’s continuing modernisation of its brands in the city.

The company began life in 1848 as the workshop of watchmaker Louis Brandt, then 46 years after their father established the company (and 15 years after his death), brothers Louis-Paul and César created a 19’” (ligne) pocket watch movement that not only refined the functionality of time-setting and winding through the crown, but also introduced industrialised production standards, meaning the watch could be produced in large numbers and could, for the first time be repaired using interchangeable spare parts. It was named Omega after the last letter in the Greek alphabet, as the ‘last word’ in watchmaking.

The final 19’” movements might have rolled off of the Omega production line in 1923, but the brand recently uncovered sufficient components for Omega’s Atelier Tourbillon department – responsible for Omega’s rarely seen Central Tourbillon - to build 19 complete movements (what a stroke of luck that matched up so neatly, eh?) and house them within a pretty special commemorative pocket watch, the 19 Ligne Pocket Watch 125th Anniversary Edition.

Not all of the movement components will be original; the mainplate, bridges, escapements and bimetallic hairsprings will, but Omega will be updating barrels, mainsprings, screws, chatons and rubies. The gear train has also been recalculated and reproduced to modern standards which along with the new mainspring is certain to improve on the specifications of the original watches in terms of timekeeping and power reserve.

The rebuilt movements will then be decorated using a ‘DDR’ Damascene pattern that found huge popularity with US buyers of the original watches. Contemporary Omega had nothing capable of producing the effect and needed a new machine, essentially a semi-automated router, to cut shallow lateral channels into the surface of the bridges, as seen below.

The movement will then be encased in a newly designed half hunter pocket watch case in Omega’s proprietary 18ct Sedna gold with the DDR pattern replicated in relief on the caseband and infilled with red grand feu enamel. As well as setting the time and winding the mainspring, the crown positioned at 3 o’clock also releases the hinged caseback, to reveal the movement, and the front cover, which features a neat GMT ring inside.

Despite showing a few images of what the completed pocket watch will probably look like at the launch event, Omega is waiting until later in the year when the project nears completion to show it off to the public. The best we can offer at this stage is the supplied vintage-style ad mock up above.

Omega is really doubling down on its history at the moment, the brand took this same approach when it rebuilt 18 of its vintage 18”’ CHRO calibres last year and it recently announced it would be bringing the legendary Calibre 321 chronograph movement back into production after 51 years by scanning Astronaut Gene Cernan’s own watch, although we won’t know which watch this finds a home in until Omega’s Moon Landing 50th anniversary celebrations kick off later this year.