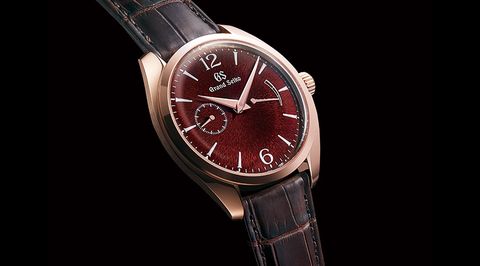 Ahead of Baselworld 2019, Grand Seiko has released details of four new watches to join its Elegance collection. Three are cased in gold (two red and one yellow) and one in steel; two have Urushi lacquer dials and three will be limited in number. What you really need to know, however, is that all of them look pretty great.

The four watches introduce a very slightly new case shape, measuring 39mm across and 11.6mm thick, and what looks like a more steeply domed sapphire crystal than previously found in the range. All come on leather straps - these are being pitched as dress watches, so no steel bracelets here. The first impression, particularly when looking at the most eye-catching of the gold models, is something reminiscent of the Grand Seiko 8-Day Spring Drive, but these are purely mechanical, and a whole lot smaller.

As with most of the significant watches Grand Seiko has released since it became a standalone brand, these watches have got some lavish dial-work going on. Common to all four watches is a new dial configuration, thanks to the new movement powering them - which we'll come back to in a second. The two rose gold cased watches (SBGK002 and 004) have Urushi lacquer dials, one glossy black and one in a rich burgundy red with a sunburst pattern beneath, and unique to these are oversized Arabic numerals at 12 and 6 o'clock. The hour markers, numerals and GS logo are all created by Urushi craftsman Isshu Tamura, using a technique known as Maki-e, which consists of applying gold or platinum powder to the lacquer, which is then polished to a shimmering finish. These two are limited to 150 pieces each, priced at €31,400 and will be available in March.

The steel-cased model (SBGK005) is the third limited edition watch. It too has a standout dial, not lacquered but decorated in what Grand Seiko refers to as a Mount Iwate pattern, after the mountain in the Shizukuishi region of its construction. It's a textured pattern that radiates from the centre, in a delicate shade of mid-blue. This model features more typical polished indexes, and the only colour contrast on the dial comes from the yellow gold GS logo. Limited to 1500 pieces, it is priced at €7,400 and is also available in March.

Lastly, Grand Seiko has also given us details of a yellow gold cased model (SBGK006) that will join the regular collection - i.e. is not limited in number - from July. This comes with a white dial - not lacquered - and will cost €20,700.

Now, let's talk a bit about the movement: all four of these watches use a brand new mechanical Grand Seiko calibre, calibre 9S63 which is the first hand-wound calibre to be produced by Seiko in eight years - and therefore the only hand-wound represented in the modern Grand Seiko line-up. It is also the first GS movement ever to feature a small seconds subdial. Beating at 28,880 vph (4Hz), it is regulated to +5/-3 seconds a day, in line with other Grand Seiko mechanical movements.

It has a 72-hour power reserve, and on the steel model only, features a number of decorative blued screws - not normally a Grand Seiko flourish. Otherwise, the movements are finished with broad stripes and narrow bevelling, with countersunk jewels and polished bridges. Over the curved sapphire caseback window, the blue lion of Grand Seiko is printed.

We are hugely looking forward to seeing these up close in March - and finding out what's become of SBKG001 and 003! We'll keep you posted...