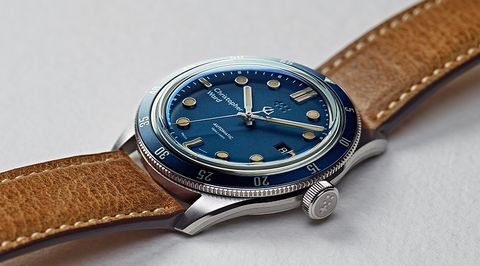 British watch brand Christopher Ward has launched a new C65 Trident Automatic, the latest model to join its family of dive watches. It follows on from the hand-wound C65 Trident, as well as bronze, GMT, and numerous limited versions.

Continuing to draw on the aesthetics of 1960s divers watches, the steel C65 Trident Automatic features a matte dial in black or navy blue, with raised indices filled with Old Radium SuperLuminova. The indices are much chunkier than on the hand-wound C65 Trident, giving an altogether more utilitarian feel; other points of difference include a cleaner dial and bezel with fewer markings.

For Christopher Ward’s Senior Designer Adrian Buchmann, it was important to differentiate the two watches while keeping the design language consistent: “We imagined that if the original hand-wound C65 Trident Diver references the early ’60s, then the new automatic should look forward to the late ’60s. Thinking like this allowed us to keep the two core C65s separate from each other in a way that made sense, while allowing them to remain closely linked too.”

The automatic has a larger movement, using a Sellita SW200-3 with 38-hour power reserve instead of a Sellita SW210, but a decision was made to keep the case diameter and height the same. At 41mm in diameter and 11.55mm in height, Mike France, CEO and co-founder of Christopher Ward, describes the automatic’s dimensions as “the current sweet spot in terms of size”.

Equally savvy is the price point - at £695 on a leather or rubber strap, the automatic costs the same as the hand-wound. (The price scoots up to £760 for the steel bracelet.)