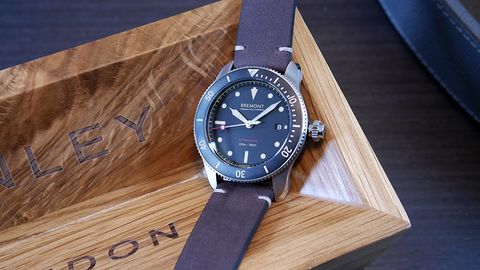 Bremont’s decision not to appear at Baselworld this year saw it take up residence in a Bloomsbury town house for a week. Decked out by Linley and peppered with typical Bremont touches – an E-type bonnet here, a Martin Baker ejector seat there – it’s hard to imagine a more natural environment to experience the brand.

The big story this year is that Bremont has released its first mens watches with a smaller case size. Since the brand started delivering watches ten years ago, the Bremont Trip-Tick case has been a real signature and point of pride for the brand – but having surveyed more than 5,000 people, Bremont found that making a smaller version was a top priority.

The 43mm case comprises three parts; a steel front piece that includes the bezel and lugs, a titanium or DLC-coated steel caseband ring, and a steel or steel and sapphire caseback. It’s machined at Bremont’s facility in Silverstone, hardened to 2000 Vickers (roughly three times that of standard 316L steel) and has become a real touchpoint of design as the Bremont collection has grown and grown. It has been downsized before, to 32mm and 37mm in Bremont’s ladies watches, but this is the first time the brand has brought in a smaller mens size.

Two separate lines will be using this new 40mm case: a new set of Supermarine dive watches, and a new family of watches entirely called the Airco.

First, the Airco. Named for one of Britain’s very first aviation companies (based in Hendon, north London, it was the precursor to De Havilland and supplied thousands of planes to Britain’s military during the First World War), the Airco comes in two flavours: Mach 1 and Mach 2.

Both share a satin-finished steel case with a quite softly-defined stepped bezel design and open sapphire caseback. The Airco Mach 1, above, is the more openly “vintage” of the pair, with pipette-style hands, an orange second hand, cream luminova and red accents on the seconds ring.

Mach 2 gets more classical serif-font Arabic numerals, feuille hands and a slate grey dial. The only note of colour is a red triangle marker at 12 o’clock and the date window moves from 3 o’clock to 6 o’clock. Mach 1, so far, is more of a sure-fire hit, Mach 2 rather splitting opinion as to whether the more genteel aesthetic works so well.

Shrinking the case down and keeping everything in proportion (the Airco just about fits under a shirt cuff, unless you opt for the NATO strap) has meant the watches take a tiny hit on the technical front. They’re still water-resistant to 100m (the same as a Solo) but gone is the anti-magnetic Faraday cage. We’re prepared to say that won’t bother too many customers.

The Airco is an almost-entry level watch for Bremont, costing £2,895 on a strap or £3,295 on a steel bracelet. That’s £100 more than the same options for a standard Solo with satin-finished case. With the Airco, you get a NATO strap included whether you buy the bracelet or the leather strap.

Bremont has never been a “bracelet brand”, but there are signs that here too it is listening keenly to the market. A huge number of men’s watches sell on a steel bracelet (hi, Rolex!) and it makes sense for Bremont to have more to offer there.

Nowhere is this more obvious than with the introduction of the new Supermarine references. Designated Supermarine Type 300 and Type 301 (after the original model number of the Supermarine Spitfire), these are the other new 40mm watches for 2017.

The case is close but not identical to the Airco’s. It has slightly thicker bevelling on the lugs, for instance, and measures half a millimetre thicker (13mm plays 12.5mm) thanks to the need for higher water resistance (300m). Instead of that stepped bezel there is of course a rotating dive bezel, featuring a ceramic insert for the first time.

The Type 300 comes in two versions, one with a black dial and one blue with a sunray pattern. It’s the same blue you’d find on a U2 or elsewhere in the Bremont family, but for some reason doesn’t quite work so well here – it looks too shiny next to the other models. But you’ve got to have a blue dial in any set of new watches these days.

Like the Airco, these watches lose the Faraday cage protection of the larger Supermarine divers, and although 300m is absolutely ample water resistance for pretty much anything you’d like to do (not to mention the fact that Bremont tests its watches to well beyond their stated parameters), these are symbolically “desk divers”, albeit tough ones. So there is no crown guard, and the big lume pots of the Supermarine are replaced by more delicate Arabic numerals and baton markers.

It’s a similar story for the Type 301 – just with a more vintage look and feel. This gets a different set of hour markers with cream luminova, and matching bronze-tone numerals on the bezel. The new Supermarines all have closed casebacks, engraved with a stencil outline of the original Supermarine Seaplane.

Both the Bremont Airco Mach 1 and Mach 2 and the new Supermarine collection all use calibre BE-92AE, a modified ETA 2892 with COSC certification.

Elsewhere, there were two other watches that stood out from Bremont’s 2017 collection. First up is the America’s Cup AC35, a dressy gold piece using Bremont’s proprietary calibre BWC/01, developed in conjunction with LaJoux-Perret.

It is being produced to mark the finale of the 35th America’s Cup, which draws to a close in Bermuda this summer. Bremont is no longer officially affiliated with Team Oracle and it’s not official timekeeper for the overall competition (contrary to what you might have read, neither is Panerai) but retains the rights to produce America’s Cup watches. And this is a cracker. An elegant dial design with a very subtle Auld Mug motif across it; small seconds at 9 o’clock and something pretty rare in watchmaking – flame-blued steel hands with luminova inserts.

According to Bremont co-founder Giles English, finding a supplier capable of creating these hands was a real struggle. It’s just not normally combined, although as he points out, “you need luminova on any watch, whether it’s classical or sporty.” It’s something we’ve seen before on the Wright Flyer, but nowhere else.

Another nice detail is the caseband, which combines steel and bronze between the rose gold front and caseback. The AC35 will be made in a limited run of 135 pieces, priced at £16,995.

Calibre BWC/01 is a handsome movement, and here it gets a bright yellow-gold rotor
Courtesy

And last but not least, we wanted to highlight the latest watch from Bremont’s partnership with Jaguar. There may be more to come on this front later in the year, but for now we have the MkII chronograph in a panda dial configuration.

It lifts the design a lot, leaving the all-black existing model looking pretty heavy by comparison. Not a lot else has changed, save for some red tips to the hour and minute hands, and a new blue racing leather strap, but it’s good to see the Jaguar partnership going strong.

We will have more on the rest of Bremont’s new watches, including a partnership with Norton motorbikes, a refresh to the ALT1-P and another regatta chronograph, in the weeks to come.