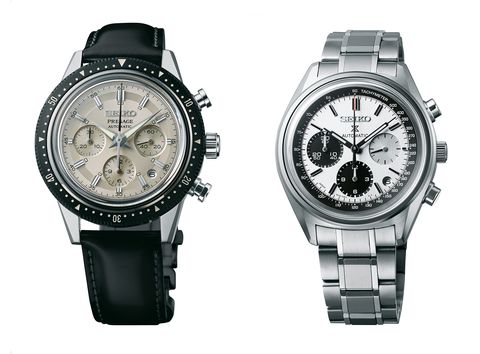 It is important to be able to admit you were wrong. Especially in the face of overwhelming evidence.

In my defence, when I wrote that Seiko had no intention of honouring the 50th anniversary of the automatic chronograph, I thought I was on pretty safe ground - basing my conclusion on conversations with several Seiko representatives and employees from the President and COO Shuji Takahashi downwards. But clearly those guys have a well-developed poker face because here we are with news of exactly that: a 50th anniversary commemorative chronograph marking the development of the world's first automatic chronograph (you can argue the toss on this one all day, of course, but I come down in Seiko's camp - more of which here).

Anyway, Seiko has surprised us with not one but two limited edition chronographs, each marking a significant anniversary. Before we get into them, it's worth noting that they do bear out one of my predictions from last year - something we're already seeing elsewhere too - that Seiko intends to bring Presage and Prospex firmly into the £3000-£5,000 price bracket. Both of these are pricier than the similarly-specced Presage 60th anniversary chronograph from a couple of years ago; you're now in "this or a Speedmaster" territory.

Produced under the Presage umbrella, this watch pays tribute to the Ref.6139, Seiko's first automatic chronograph (and almost certainly, the world's first). It uses calibre 8R48 which, as the 6139 did 50 years ago, uses both a column wheel and vertical clutch. Beyond that, it boasts a couple of Seiko-specific improvements, namely a three-pointed hammer and heart-shaped cam that combine to make sure the re-set for the hands is as crisp and sharp as possible.

Design wise, it draws inspiration from a 1970 reference 6139 model that's referred to by Seiko as a "panda" - it does have black subdials on a white background, but they're at 6 and 12 o'clock rather than the 3 and 9 o'clock layout that really resembles the face of a panda bear. Perhaps that's just us being overly literal. The new model retains the orange-tipped seconds hand of the original, and a similar "hairline" finish to the dial. There's a tachymeter scale in black, as before, but the rest of the dial layout has been moved around to accommodate the new movement.

That means the two black subdials, for chronograph functions, move to 6 and 9 o'clock, with a running seconds subdial at 3 o'clock and a date between 4 and 5. The case is more in keeping with modern Seiko shapes, although the raised sapphire crystal does add a retro touch. You get two lozenge-shaped pushers and a bracelet finished with typical levels of quality (and a super-hard coating).

This is the lesser-known of the two milestones being celebrated, and in some ways the more surprising. Seiko had made pocket-watch chronographs before (although not until the 1940s) but it didn't make a chronograph wristwatch until 1964. That was the Crown Chrono, a single pusher capable of timing up to one minute only. It still used a column wheel, however, at a time when most Swiss equivalents would have been using lever cams (for a thorough explanation of basic chronograph functions, you can't beat this guide).

The new model, a Presage reference, takes its dial colour and distinctive rotating bezel directly from the Crown Chronograph; it too uses the 8R48 calibre so naturally we also have a three-subdial layout. Here, the subdials are smaller and presented without the contrast of the Prospex. Pump pushers, a box sapphire and a black leather strap complete the look.