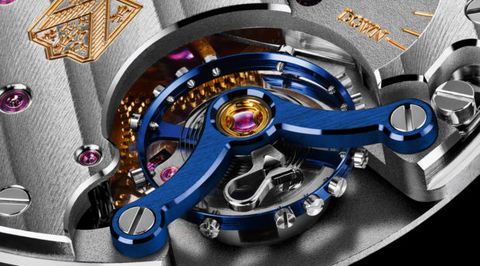 H. Moser & Cie has proved to be one of the more innovative of the new generation of watch companies, having a wealth of interesting and clever movements in their catalogue, a sharp aesthetic sense and a fast-growing, sophisticated manufacturing set-up. It has now gone a step further and thrown a hat, via the company’s Precision Engineering subsidiary, into one of horology’s more contentious rings.

The one sure-fire way to get a heated debate going among watch types is to throw out an opinion on the right material for the balance spring. This being the prime influence on the rate and regularity at which your watch runs, it’s the most important argument in horology. Add that there are two main schools of thought; the metal alloy and silicon camps and you have the ingredients for severe differences of opinion. And people have been arguing over balance springs ever since Robert Hooke (or Christian Huyggens, take your pick) invented the idea in the late 17th Century. No duels have been fought over balance springs to my knowledge, yet.

As you may know already, the problem with balance springs is that their behaviour can be change as the environment around them changes. Early balance springs for watches were made of steel (and later tempered steel), which performs well only so long as they were kept in stable environments, but with even modest changes in temperature, the elasticity of the spring changes, affecting the time each swing of the balance wheel takes and, therefore, the rate of the watch. Any spring made with a high ferrous metal (eg Iron) content has the added risk that exposure to magnetic fields can cause the spirals to stick together with attendant consequences for the rate.

Finding alternatives to steel was harder than it sounds and Elinvar, the first serious answer to the problem, won its inventor the Nobel prize in 1920 in recognition both of the difficulty and value of the invention. Nivarox, which still accounts for the vast majority of balance springs, came along in the 1930’s and there the matter rested. Nivarox has an Achilles Heel in that it’s easy to magnetise, a problem that became ever more acute as the world mechanised. Work-arounds such as shielding the movement in a “soft” iron cage, proved adequate enough but hardly satisfactory so it was hardly a surprise when the subject was re-opened in the 90’s with advent of material printing technologies that used silicon and similar.

Pioneered by Ulysse Nardin and increasingly used by Patek Philippe, Silicon has advantages: it’s a-magnetic and has thermal co-efficient of elasticity (also referred to as Young’s Modulus) so close to zero as to be irrelevant. This means a reduced need for expensive adjustment assemblies and therefore less possibility of error – always a desirable result. An added bonus is that the springs are produced in the exact geometry required, with the weight, flex and strength of the whole spring pre-determined, which allows for better performance to be designed in. By contrast, metal alloys have to be formed and tweaked mechanically, a more labour-intensive and less precise process altogether, though advocates would say that this approach allows you to adjust each watch individually.

Silicon has a problem, however: it’s comparatively fragile. While the chances of failure through everyday use look almost comically negligible (a risk that can be reduced further with treatment as Patek and Omega do), the watch industry likes industrial amounts of certainty wherever possible, which is why Rolex have preferred, so far (the company is trialling a Silicon balance assembly), to develop the metal alloy approach with a material they call Parachrome. Not quite as stable over temperature ranges as Silicon and without the precision advantages that silicon confers, it clearly scores higher on the trust factor for Rolex. Which is better? I’ll be sitting this one out thank you very much, though if forced, I would vote for the silicon solution for the ability to control every aspect.

Moser’s, or rather Precision Engineering’s, solution is on the Rolex side of the fence, relying on an alloy of niobium and titanium. That means that the springs will be a-magnetic (PE refer to this as paramagnetic, which we have to hope is a mistranslation) and, according to PE, comparatively robust, though see above. If the new alloy is not revolutionary as such (save for being a novel mix of materials), it does allow Moser to offer much the same level of performance as heavyweights such as Rolex and Omega. And that’s quite a good result for a minnow.

The PE5000 balance spring makes its debut in a special “deep blue fumé” dial version of the Venturer Small Seconds XL of which ten pieces are being made.