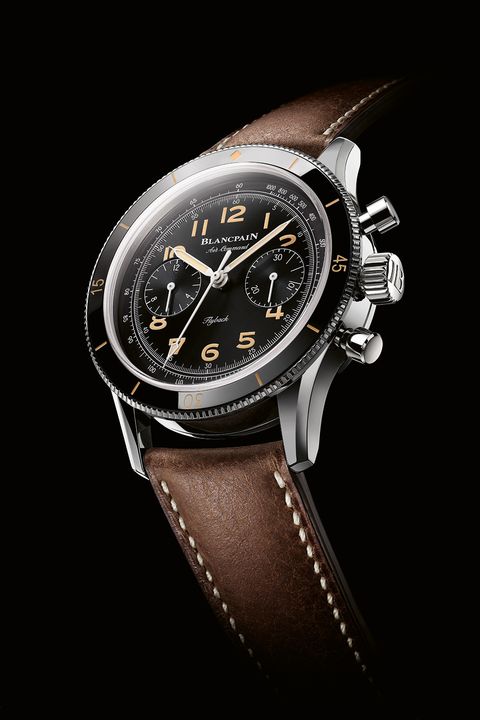 There's a new pilot's chronograph in town, and it comes from an unlikely source. There is a genuine historical connection though, no matter how slender.

Blancpain was very much on the radar of the US military in the late 1950s, the US Navy having already passed the Fifty Fathoms with flying colours after putting it through a series of gruelling fitness tests for its Explosive Ordinance Divers.

After the French Ministry of Defence set the template for modern aviator’s chronographs in the early 1950s with its Type 20 specification, Blancpain’s enterprising US distributor Allen V. Tornek (he famously manoeuvred around the US Government’s Buy American Act by convincing Blancpainto rebrand the 1,000 or so watches it would supply to the Navy as ‘Tornek Rayville U.S.’) took the initiative to develop a pilots’ chronograph that would be pitched at USAF pilots.

Blancpain isn't saying how many of these Air Command watches were made; apparently there’s no surviving documentation, other than the fact that around a dozen prototypes were created for the project, but today that makes them a rarity on the vintage market, with one selling at Phillips' Start-Stop-Reset 2016 auction for £77,000.

The 2019 reissue (the name has been recycled once before by Blancpain for a watch that bears absolutely no relation to the original) is an incredibly faithful replication of the original. Phillips’ own measurements put the original at 42mm, which would make the new case half a millimetre larger but we’ve seen them side-by-side at Blancpain HQ and couldn’t spot an immediate difference.

The dial of the new watch features the modern logo (a fraction too big, of course) and adds the word Flyback for good measure. The hand set has only seen the most minor of tweaks, with the spear of the chronograph seconds hand moved closer to the tip. Arabic numeral hour markers are painted in raised Super-LumiNova in a shade called ‘old radium’ for a touch of not entirely unwelcome fauxtina.

That’s not to say the dial doesn’t look different because it does, but that’s down to the setting of the glassbox sapphire crystal. In the interests of legibility Blancpain took the decision not to allow the dome of the glassbox to sit too proud of the bezel because, while exposed side walls of a ‘box’ might allow more light to flood the dial, they also introduce a significant amount of optical distortion. As a result, the glassbox of the new watch appears much flatter. We’re not entirely sure whether this has been achieved by using a ‘shorter’ glassbox or a deeper bezel but, either way, the dial is instantly more readable.

The watch also marks the first time Blancpain has used a glassbox crystal on the caseback, which also naturally reveals the biggest change between the modern watch and its predecessor: the movement. Gone is the manual Valjoux 222 of old, replaced with a 5Hz hi-beat automatic F388B flyback chronograph movement with 50-hour power reserve, vertical clutch and column wheel. I could live without the red gold propeller-shaped winding rotor - it just feels too gimmicky for a watch that otherwise makes such a point of being faithful to the original.

One thing’s for certain, numbers of the 2019 reissue are much easier to ascertain than those of the 1950s watch, with 500 pieces being created.