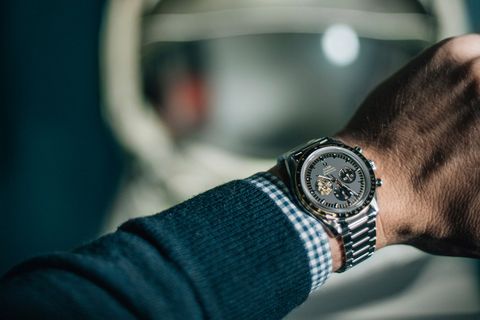 Confusingly, this is actually the second commemorative Speedmaster Omega has given us this year to mark the fiftieth anniversary of mankind's small step onto the surfaceo of the Moon.

Announced in March in solid 18ct Moonshine gold, Omega’s first [delicious] bite of the Speedmaster’s link to the 50th Anniversary of the moon landing was never going to be the most accessible watch, even as limited-edition pieces go and especially when limited to just 1,014 watches.

So when Omega (along with its other Basel-bailing Swatch Group prestige siblings Jaquet Droz, Breguet, Blancpain, Harry Winston and Glashutte Original) revealed its 2019 novelties last week, no-one was surprised by the presence of a second commemorative Speedy, this time in stainless steel.

The 42mm Apollo 11 50th anniversary moonwatch packs the same 3861 manual wind chronograph movement as the aforementioned gold watch, a modernised 861/1861 which conforms to Omega’s Master Chronometer standard, in part thanks to a co-axial escapement and silicon balance spring. The only difference between the two movements is the finish, with the bridges of this model rhodium-plated rather than the Moonshine gold plating used for its precious metal sibling.

But the real story here is the dial, a moody mix of black and dark grey that represents as much of a tonal shift for the Speedmaster as crafting the whole watch out of solid gold did. While this is a stainless steel watch, there’s a liberal dash of Omega’s proprietary Moonshine 18ct gold alloy too, perhaps not enough for this to be considered a bimetal watch, but certainly enough to enrich a fairly special tool watch.

The hands and indices are made from solid gold, while the central chronograph seconds hand is PVD-coated in Moonshine, no doubt a weight consideration. The bezel too is solid gold inset with a polished black ceramic ring, with an engraved tachymeter scale in-filled with Ceragold.

The 11 o’clock position is marked not by a baton but with an Arabic numeral, a reference to the famous mission number, while the running seconds sub dial at nine o’clock features a laser engraving in gold, depicting Buzz Aldrin stepping down onto the lunar surface.

On the caseback is another laser engraving, this time of an astronaut’s footprint on the lunar surface, surrounded by Neil Armstrong’s immortal ‘One small step’ speech with words picked out in Moonshine gold and sealed beneath a sapphire crystal disc.

Omega has also opted to recreate the ‘flat link’ steel bracelet, so sought after by Speedmaster collectors, in another neat touch which sets this commemorative piece apart from the modern Speedmaster offering.

With 6,969 pieces being produced, the Apollo 11 50th anniversary moonwatch might challenge the accepted definition of what might be considered limited, but you can’t knock Omega for leading the conversation with supply in mind rather than demand.

The Omega Speedmaster Apollo XI is priced at £7,370

For a special bonus, here are some pictures of the frankly lovely presentation box that will house the watch, complete with lunar lander module model, treated cork strap, strap adjustment tool, loupe and two embroidered patches.