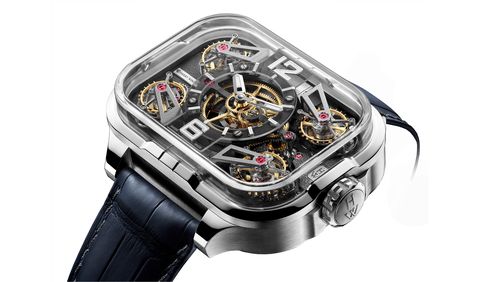 Harry Winston’s decade-long, tourbillon-themed tasting menu is at an end. After launching in 2009, the Histoire de Tourbillon project set out to explore all things tourbillon-shaped with (more than) a little help from Gruebel Forsey’s movement house, Complitime.

In truth there can be few more suitable watchmaking partners to develop a series dedicated to the tourbillon than Gruebel Forsey, which itself has been exploring and refining the enigmatic gravity-defying mechanism since 2004.

The Histoire de Tourbillon 10 rounds out the series with a record-breaking watch, the first to feature four complete tourbillons, each with their own balance wheel and hairspring. Gruebel Forsey’s recent Quadruple Tourbillon uses two balances each with two tourbillon cages on different axes, while the Histoire de Tourbillon 4 from 2013 features a single regulating organ enclosed within a tri-axis tourbillon with three concentric tourbillon cages rotating at different speeds. Roger Dubuis has even presented a watch with four balances in its Quatuor, but none has ever managed to bring all of those elements together before.

The HdT 10’s tourbillons sit at the corners of its large rectangular case and each cage rotates at the same speed, completing a single rotation in 36 seconds. A vast glassbox crystal provides a screen through which to view this horological choreography.

The theoretical benefit of watches with multiple balances is that the various outputs are fed into a differential to create an average which should compensate for any rate error present, but of course the accuracy of said average depends on the accuracy of the input from the balances in the first place. Here three differentials are used, one to average the output of the two tourbillons on the left-hand side of the dial, one to average the two on the right and a larger mechanism can average these two results. Very much the "semi-final, final" approach, although without the added irrelevance of the third place playoff to round out the sporting metaphor.

It’s interesting that the Histoire de Tourbillon 10 opts to mount all four of the tourbillons in the same plane, rather than at differing inclinations. Mounting four identical tourbillons rotating at the same speed at the same angle doesn’t suggest there would be much in the way of variation to begin with, certainly not because of watch positioning at least.

Given the amount of energy necessary to power four 21,600vph balances and four quick tourbillons the inclusion of four barrels is hardly surprising, especially when you consider the amount of available room inside a case measuring 53.5mm x 39.1mm x 17.6mm.

The barrels are stacked in two pairs of two linked in series with one feeding the other to offer some degree of constant force. Once fully wound the manual watch will run for 55 hours.

Considering the watches that have come before it (and not to mention who is responsible for its watchmaking) the design of the Histoire de Tourbillon 10 is something of a surprise. Its bridges and the placement of its tourbillons are uniform, symmetrical and balanced with none of the bulging case lines found on Gruebel Forsey watches, or even earlier Histoire de Tourbillon designs for that matter. It sounds vaguely ridiculous to criticise a positively gargantuan rectangular watch with four tourbillons for being too safe, but I would have preferred a little more eccentricity in its presentation.