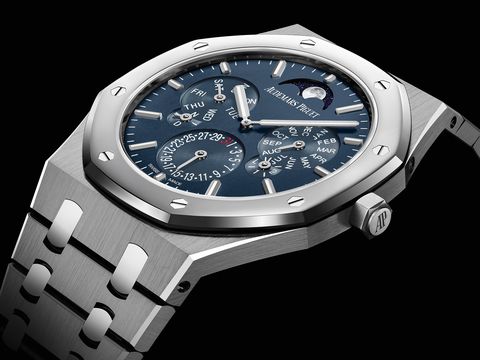 Audemars Piguet has announced that its Royal Oak Perpetual Calendar Ultra-Thin is now ready. A year and a half after we first saw this watch, in the form of the RD#2 Concept Perpetual Calendar, it is now in full production (indeed, some have already been delivered).

There have been some changes to the watch in this time, but first let's remind ourselves what the RD#2 set out to achieve. It was one of the most impressive watches of 2018, for all that it remained a prototype, as it turned accepted wisdom on its head and created the world's thinnest automatic perpetual calendar. The calibre measures just 2.89mm from top to bottom, and the whole watch is 6.3mm thick - vital statistics that would place it well into the ranks of slimline watches even before you add complications, let alone such bulky ones as a perpetual calendar.

The watch isn't massively wide, at 41mm, and it has a reasonable power reserve of 40 hours (the watch beats at a relatively slow 2.75Hz), so there really has been some technical wizardry to get it all to work in such a small space. As we said when we first reported on the RD#2, it's a complicated business but in a nutshell, it relies on a thin base calibre (AP's Calibre 2120, a descendant of the Jaeger-LeCoultre Calibre 960; 2.45mm thick) with some extreme modifications made to the calendar module.

The two biggest, for which AP filed its own patents, were to reduce the height of the month wheel and date wheel, by merging the teeth – which count off individual days or months – with the cams, which control for the length of month and account for leap years. The dial also functions as a bridge (it's not functioning as the mainplate as previously reported; AP has clarified that it's technically a bridge, and controls the endshakes - the amount of acceptable play in a pivot - of the calendar module). This is despite it remaining to all intents and purposes a normal, non-openworked dial (unlike similar efforts at Bulgari and Piaget, where there is no dial to speak of and the mainplate is also openly on view).

Speaking of the dial, this is where we can see the main changes that the RD#2 has undergone to become the finished article. Gone is the tapisserie pattern so beloved of Audemars Piguet, in its place a simpler, satin-finished blue dial. Gone too is the brushed texture on the bezel and centre links, replaced with a fine polish. Evidently the feedback was that the original watch felt a little busy, a little dense of texture.

In other respects, the watch is unchanged. It is officially on sale now, but we are told it is (unsurprisingly) one of the brand's most in-demand models, so if you have your heart set on one, be prepared to join the queue. True love waits, as they say.