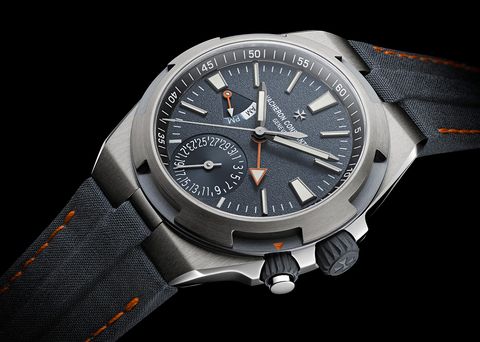 Vacheron Constantin has announced details of a totally unique Overseas Dual Time, produced as a one-off commission for American mountaineer Cory Richards as he embarked on his third ascent of Mount Everest.

Attempting to summit Everest via the north east ridge, one of the hardest routes to the peak, Richards, who has previously climbed the mountain without oxygen, was forced to turn back as a result of bad weather. Nevertheless, his expedition showcased a fascinating new design for the Vacheron Constantin Overseas.

Approaching the brand, Richards had requested a Dual Time to enable him to keep track of time in the USA and Nepal, but Vacheron Constantin went that little bit further by creating a special prototype better suited to life at the roof of the world.

The watch is cased in titanium for the first time, reinforced by a layer of tantalum beneath the bezel. Titanium crown guards were added, and the watch was fitted with an orange and grey ventile fabric strap - a material chosen for its water resistant qualities.

No technical changes were carried out on the movement (Vacheron's in-house automatic, with 60 hours of power reserve) but it received a grey NAC coating, as well as a custom-made winding rotor engraved with a diorama of Everest, taken from one of Richards' photographs.

Most obviously, however, the watch received a sporty new colour scheme that sets it quite apart from any other Overseas. The grained grey dial provides the perfect contrast for the orange GMT hand and AM/PM indicator, as well as the blue luminova on the enlarged 12, 3 and 9 o'clock hour markers. There is also an orange triangle marker on the bezel at 4 o'clock, indicating the dual time crown. Both crowns have also been given a matt grey coating.

Here at QP we've expressed a fondness for the current generation Overseas since it was launched in 2016, but the one criticism you could potentially level at it is that it plays it safer than some of its natural rivals. With this design, Vacheron Constantin has shown that it can produce a truly lust-worthy Overseas with a completely new aesthetic. Let's hope that some of these elements make it onto a full production watch.