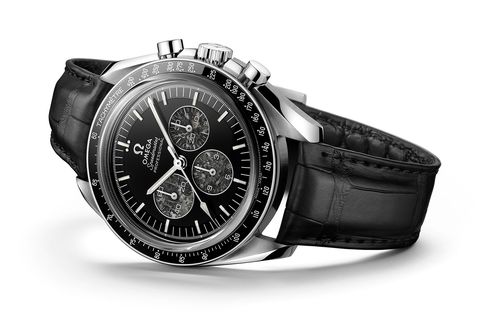 Back in January, we reported that Omega was planning on reintroducing the original Moonwatch movement, Calibre 321. We knew then that it would be a busy year for all things moon-related, and Omega hasn't disappointed on that front, with not one but two limited editions to mark the 50th anniversary of Apollo 11 landing on the moon. But neither housed a new version of Calibre 321.

Over the weekend - at precisely 02:56 GMT, 50 years to the minute since Neil Armstrong's left foot made contact with the surface of the moon - Omega released details of one more commemorative Speedmaster Moonwatch. This is the watch that brings back that special movement: the Speedmaster Moonwatch 321 Platinum.

Calibre 321 was used in all Speedmasters from the model's introduction in 1957 until 1968 (ironically, perhaps, having been superseded by the time it actually made it to the moon) and was the movement powering all Speedmasters to be worn on the moon, as even once Omega replaced it with Calibre 861, NASA carried on using watches which met the original specifications that it had commissioned.

For this watch, Omega has recreated the movement using one specific reference as its base: the second-generation 321 found inside Gene Cernan's Speedmaster ST 105.003 from the Omega Museum in Bienne. This watch was worn on the moon in 1972 as part of the Apollo 17 mission, and Omega's movement technicians have spent the last two years digitally scanning it to ensure the new models are faithful. It has been produced on modern machinery to modern tolerances, but we hear that it has been created in a dedicated workshop away from Omega's main production lines.

Now, a note on what this really means for the new 321. Many have latched onto the detail that for the revived movement, Omega has coated bridges and other components in sedna gold (its proprietary alloy of red gold) rather than a copper plating, as the original did. There are other differences between this an a hypothetical new-old-stock 321 too; it will have been made to higher tolerances, with different alloys, springs, lubricants and the like. But it is as close as one can reasonably get to identical. The use of gold rather than copper might be seen as an unnecessary luxurification, but our hunch is that it was done with at least one eye on improved durability; the old copper coatings are known to wear. And besides, this is a platinum-cased watch with plenty of other opulent details; if excessive luxury troubles you, the movement is the least of your worries.

Some are also quibbling over how significant this movement reissue really is, given that Breguet, also owned by the Swatch Group, has continued to use a lightly modified (and differently-finished) version of the 321, calibre 533.3, for years. In fact, both this and the Omega Calibre 321 were based on a Lemania movement, Calibre 2310, descendants of which remain in use elsewhere too, notably at Patek Philippe in the 5170.

This is an odd sort of thing to get worked up about, in our view. It's easy enough to list the precise differences between these various movements (and Omega's 861, and 1861 for that matter). They can be quite important - changing a lateral clutch for a column wheel, for instance, or adding a swan neck regulator - or merely aesthetic (and we say 'merely' knowing that the visual side of this whole story is a huge part of its appeal). But in either case, saying that because two movements share a common base makes them somehow interchangeable is really to miss the point. Omega has invested a lot of time and effort in a nigh-on totally faithful recreation of an historic calibre - the fact that a genetically similar cousin exists somewhere else in the watch world is neither here nor there.

Getting back to the watch at hand... the Moonwatch 321 Platinum measures 42mm across, in a design inspired by the 4th generation ST 105.012 case with twisted lugs. It comes only on a black leather strap with platinum pin buckle - no weighty bracelets pushing the price up even further. There is a ceramic bezel with white enamal inlay for the tachymeter scale. The dial is made from onyx, with white gold hour markers and minute and hour hands; the three subdials are all inlaid with slices of meteorite. If you're curious about the use of meteorite in watch dials, we've covered it in depth before, but it's worth explaining that this differs slightly; Omega has used exclusively lunar meteorite, i.e. rocks that were once part of the moon, and have ended up on earth as a result of asteroids crashing into the moon millions of years ago, and blasting debris into space.