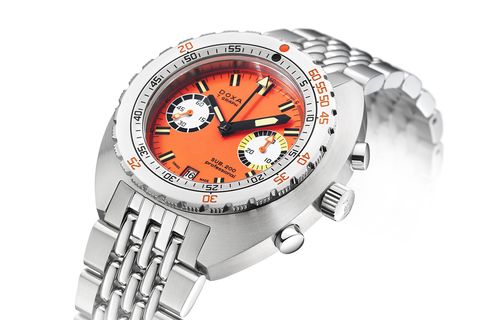 This is turning into quite the year for 50th anniversary celebrations. If it wasn't enough to be marking a half-century of the TAG Heuer Monaco, the Zenith El Primero, Seiko's introduction of the first quartz watches and Omega's trip to the moon, we also have... the Doxa Sub 200 T.Graph.

While not having quite ascended to the same ranks of horological significance as the first four, the T.Graph is a cult favourite among dive watch aficionados. Doxa was a key player in the golden age of the dive watch; it might not have been there right at the beginning with Blancpain and Rolex, but by the 1960s it was producing some of the most focussed dive watches on the market.

Related Story
The best alternatives to the Rolex Submariner

It was the first brand to sell watches with helium escape valves to the general public, and it was the first to create a rotating bezel that featured a de-compression table (on the 1967 Doxa Sub 30ot). In 1969 it launched the Sub 200 T.Graph, which has become a cult classic thanks to its emphatic 45mm case and uncompromising tooth-edged bezel, and its relative rarity: only around 900 were ever made, split equally between black, white and orange dialled versions.

In March, Doxa debuted a solid gold Sub 200 T.Graph to mark the anniversary - a frankly odd item (yellow gold and orange rubber is a strong look) costing $70,000 and limited to 13 pieces. Now, however, it has made a 'proper' reissue in stainless steel. Once again limited to 300 pieces, every one with the iconic orange dial, it uses new-old stock Valjoux 7734 chronograph movements. That's guaranteed to pique collectors' interest.

The 7734 is the date-bearing variant of the Valjoux 7730, a cam-switching hand-wound chronograph produced from 1966 to 1973 and used by a whole host of brands from Breitling and IWC to Lip, Hamilton and Zodiac. It was also used in a lot of 'poor man's Heuers', as well as the actual Heuer Autavia and Carrera from time to time. As you can see here, it's a two-register chronograph with running seconds at 9 o'clock and chronograph minutes (up to 30) at 3 o'clock. It runs at 18,000vph and has a 45-hour power reserve.

In other respects the new Sub 200 T.Graph is nerd-pleasingly authentic; it comes on a similar beads-of-rice bracelet to the originals, with spring-loaded clasp and wetsuit extension micro-adjustments (something else Doxa pioneered back in the 1960s). It is water-resistant to 200m, as you'd expect, and it measures 43mm across.

The Doxa Sub 200 T.Graph will be available to order from 2 September from doxawatches.com and is priced at $4,900. There is currently no UK retailer.