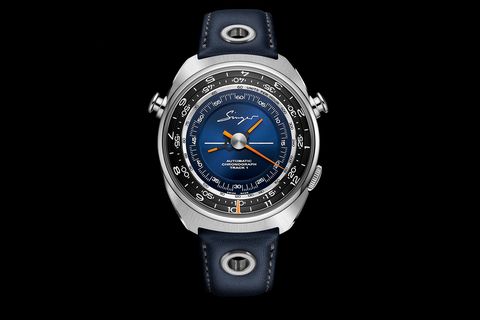 Two years on from its original launch, Singer Reimagined has announced a new version of its Track1 chronograph. Called the London Edition, it has a blue sunburst dial and dark blue calfskin leather strap to match.

Its appearance heralds the first time Singer's watches will be available to buy in the UK (from a physical location at least): as of September 5th, Singer Reimagined chronographs will be on sale at Phillips Perpetual, a new retail space created by the auction house at its premises on Berkeley Square.

The Singer Track1 London Edition is cased in grade 5 titanium and limited to 50 pieces, priced at CHF45,000 excluding VAT. It follows on from the launch edition, yellow gold Geneva edition and the black and orange Hong Kong edition (which won a GPHG award for best chronograph in 2018). It houses one of the most remarkable and revolutionary chronograph movements ever made - something we profiled in depth at the time, when it was created by Jean-Marc Wiederrecht's Agenhor.

Designed to prioritise the chronograph functions above all others, it houses the chronograph hours, minutes and seconds on three central hands, with timekeeping hours and minutes relegated to the peripheral discs. The movement's construction allows for a dial-side automatic rotor, meaning you get an unimpeded view of the sensational. 477-component calibre through the caseback.

Related Story
The best chronographs for over £10,000

Singer has collaborated with Phillips before; in 2017 the auction house held a launch event for Singer Vehicle Design's DLS, a vehicle that redefines the world of classic Porsches. You can read more about the disruptive approach taken to both cars and chronographs in our long read here.