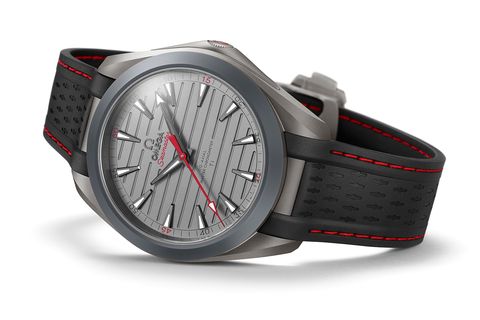 Not content with diving deeper than any dive watch (not to mention human being) has been before, or celebrating its unique lunar history in any number of gorgeous, collector-arousing ways, Omega has announced details of another fascinating new watch.

Named the Seamaster Aqua Terra "Ultra Light", it is described as being designed especially for sport, and as its launch coincides with Omega's annual pro-am tournament in Crans-Montana, and ambassador Rory McIlroy is namechecked in the press release, the sport we are invited to think about wearing the watch for is golf.

Leaving aside for a second the debate about whether wearing a mechanical watch as you repeatedly subject it to the shock of a golf shot, let's examine what Omega has done to make this watch justify its hefty price tag. Here's the other headline figure: on its fabric strap, the whole watch weighs just 55 grams.

The case is made from titanium; not your normal grade five titanium but something Omega is calling "Gamma Titanium". This refers to a compound called titanium aluminide (TiAl) which comes in three forms, of which gamma titanium aluminide is the most widely used. Thanks to its strength-to-weight ratio and resistance to temperature, it is used in the latest generation of jet engine turbine blades.

Omega's dedication to dropping weight has also meant reducing the amount of material used for the dial, but the really interesting element lies directly underneath it: we have here what is almost certainly the world's first titanium movement.

The bridges and mainplate are all made from ceramicised titanium (hence the dark colour). Omega hasn't broken the weight losses down, but this must have contributed significantly to the overall weight. Calibre 8928 is also hand-wound, dropping a chunk of weight by losing the automatic rotor, and in common with all of Omega's new movements (save the re-built Calibre 321) it is a Metas-certified Master Chronometer.

There's one other notable feature about this watch, which has been added in the name of comfort rather than lightness: a telescopic retracting crown, which can be pushed into the caseband when not needed. Omega highlights this as a feature because it will stop the crown digging into the back of the wearer's hand; speaking as a golfer (of strictly limited ability) I will say I've never noticed that as a specific problem, but if it means Rory will wear it while playing, then it was a worthwhile investment.

Visually it's quite an interesting feature, giving the watch a clean silhouette but also a slightly asymmetrical one. I'm reminded of some of Rado's True Thinline models, but also (in a much more exaggerated way) the case shapes of Bamford's Mayfair or Vertex's MP45.

As well as the fabric strap, the Seamaster Aqua Terra "Ultra-Light" comes on a rubber strap which, unusually enough, looks to be printed with a watch-shaped pattern. It also comes in blue and green colour variants to go with the red, and all three are non-limited and priced at £39,150.