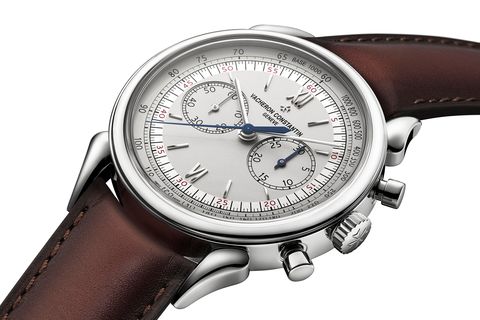 Vacheron Constantin has brought out a stainless steel version of its Cornes de vache 1955 chronograph, the latest addition to its Historiques collection.

The Cornes de vache ("cow horns", in French) is so named because of the shape of the lugs, which taper away from the case in a teardrop fashion. Even without the suffix, these root the watch clearly in the 1950s. The original, reference 6087, was the first chronograph from the brand to offer any semblance of water resistance (although it was hardly a diver; for context, the modern watch is only rated to 30m - not something we'd really recommend getting wet). It was also Vacheron's only hand-wound chronograph of the vintage era.

Vacheron Constantin
Related Story
The best chronographs for over £10,000

Vacheron Constantin hit upon the idea of a select range of vintage reissues back in 2006, and first brought the Cornes de vache into the Historiques collection in 2015. That model was cased in platinum, and was followed by a pink gold version the following year. Since then it has introduced the 1942 and 1948 calendars in stainless steel, but outside of the Overseas the brand uses steel very sparingly. A 36-piece limited edition of the Cornes de vache was produced in partnership with Hodinkee back in 2017 and promptly began changing hands for twice its retail price.

This model is technically unchanged from the precious metal predecessors, but it introduces a few key aesthetic changes to set it apart from the platinum piece. Most notably they comprise a white chapter ring with red numerals around the inner edge of the minute track; the tachymeter scale around the outer edge is now printed in black. The main dial colour is described as a "velvet-finished" grey opaline, with snailed counters. Another key visual difference is the strap, a smooth brown calf leather from Italian house Serapian; the others have both used alligator.

The Cornes de vache measures 38.5mm across - a rise on the vintage piece's 35mm diameter, but a real sweet spot by today's standards. Inside, it uses Vacheron Constantin's 1142 calibre, which is a hand-wound column-wheel chronograph originally derived from the Lemania 2310 (making this a distant cousin of the Omega Speedmaster), but modified by Vacheron Constantin to include a free-sprung balance and several signature touches -like the Maltese cross cap on the column wheel - all finished to Poincon de Geneve levels. The movement beats at 3Hz and has a 48 hour power reserve.

The Vacheron Constantin Historiques Cornes de vache 1955 is priced at £36,200.