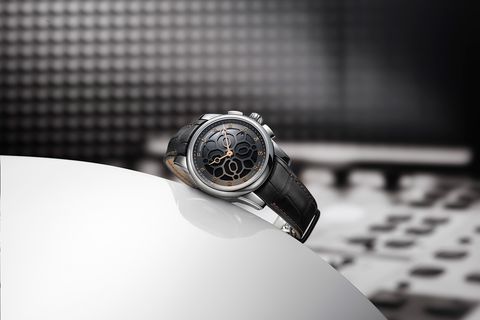 This is the Ulysse Nardin x Devialet Hourstriker Phantom. Produced in a partnership with one of Europe's most interesting (and fashionable) hi-fi startups of the last decade, it claims to be the loudest chiming watch currently being produced.

The unusual dial design is lifted from Devialet’s Phantom speaker grille, and based on Chladni patterns - visual interpretations of sound waves first recorded by German physicist Ernst Chladni using sawdust on vibrating metal plates. Also unusual is the watch's configuration - from its silhouette alone, you might take it for a chronograph, given the regulation pushers at 2 o'clock and 4 o'clock. There's no slide on the left hand side, as you normally associate with minute repeaters.

It isn't, however, a minute repeater - as the name implies, the Hourstriker chimes the hours; it can be set up (using the 4 o'clock pusher to cycle through its functions, as displayed by the small aperture at 3 o'clock on the dial) to chime the hours en passant, or simply work as an on-demand chiming watch - in which case, it rings out the number of hours, followed by a pause, and then a single chime if the half-hour has passed. So you know the time to the nearest 30 minutes, give or take.

The goal of achieving high volume comes at a time when minute repeaters are suddenly big business again; in the last few years the likes of A. Lange & Sohne, Bulgari, H. Moser & Cie and Jaeger-LeCoultre have all produced interesting and accomplished repeaters, not to mention the Audemars Piguet concept RD1 project that led to the Supersonnerie, a watch largely acknowledged to have redefined the concept of high-tech chiming watches. And it is impossible to overlook the fact that several of Ulysse Nardin's Hourstriker Phantom's key features bear a similarity to the Supersonnerie's construction, although it was developed to be very much its own thing, and caters to a different market both aesthetically and financially.

When Ulysse Nardin set out to find a hi-fi firm to lend its audio expertise in pursuit of a groundbreaking chiming watch, no-one at the watch company imagined they would end up working with a distant relative of the brand’s eponymous founder.

“It’s true,” says Emmanuel Nardin, Parisian product designer and founder of chic hi-fi firm Devialet. “Ulysse was the great-great-grandfather of my father. I’ve dreamed about designing a watch for a long time; we met Patrick [Pruniaux, CEO of Ulysse Nardin] before he was at UN, and we imagined working on a project. Then, UN was looking for an engineer to upgrade - or optimise - the sound of the Hourstriker, and we connected again. A watch is a lovely project for a designer, because it’s so small and so sophisticated, but I was also very happy to connect with my family history.”

The brief was to create a louder chiming watch than any currently on the market. Nardin’s team set to work, collaborating with Ulysse Nardin’s watchmakers to produce the Hourstriker Phantom, an hourly striking watch that chimes the hours en passant and on demand, rings out the time to the nearest half-hour. Thanks to Devialet’s specialist assistance, Ulysse Nardin claims it has achieved its goal, with a volume (or amplitude, in audio-geek-speak) of 85 decibels at a distance of 10cm.

Not all watch brands release information on the volume of their repeaters, and notably no such figure is available from Audemars Piguet, maker of the Supersonnerie, widely accepted as the incumbent record-holder. Ulysse Nardin’s confidence in their claim rests on tests carried out by an anonymous independent specialist said to be familiar with both watches.

The key breakthrough for the Hourstriker Phantom’s high volume was the suggestion by Devialet’s team that it abandon the age-old principle of mounting gongs to the mainplate of the movement. Instead, it uses a vibrating membrane (a concept also at work in the Supersonnerie) connected to an arm dubbed the “wave converter”, which is also the mounting point for the gongs. Eight holes in the caseback allow the sound to be heard more clearly, while the use of a membrane means the watch’s water resistance is uncompromised - like the Supersonnerie, it is rated to 30m.

The caseback features eight apertures, each with a V-shaped groove to carry the sound
Chris Hall

“It took about two years from start to finish,” says Nardin. “We had the knowledge and the simulations and the theory, but whether you are making speakers or watches, you do the theoretical first, then the application in a prototype, then you measure it, then you do it again.” In the end, it took around six months to find the optimum configuration for the chiming components - and it turns out the watch could have been louder still, but having achieved maximum volume, the sound made by the watch was not sufficiently pleasant on the ear. The problem was solved by a watchmaker who suggested moving the arm slightly away from the centre of the membrane, thus sacrificing some volume for harmony.

At CHF72,500 the Hourstriker Phantom is considerably cheaper than most chiming watches, largely thanks to its relative simplicity. But having perfected the membrane mechanism, Ulysse Nardin will explore the possibility of fitting it to full-blown minute repeaters and more complex sonnerie designs before long. This edition is limited to 85 pieces, in honour of its decibel volume.