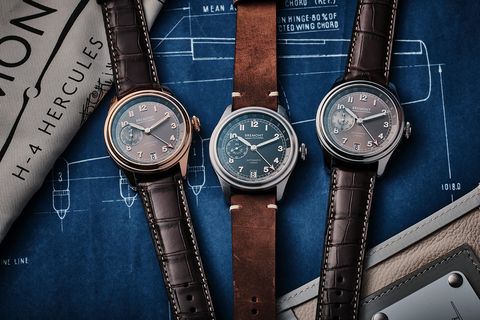 Bremont has created a watch that pays tribute to one of aviation's most eccentric and unusual aircraft, the H-4 Hercules - better known by many as the "Spruce Goose".

The watch is the latest in a long range of limited editions aimed at celebrating historically important aircraft, including the Supersonic, DH-88 and P51 Mustang. The watch it bears the closest resemblance to however is one of Bremont's most notable special editions, the Wright Flyer.

The H-4 Hercules could fairly be described as a GMT variation on the Wright Flyer; it uses the same La Joux Perret-designed base calibre, here adding an arrowhead GMT hand and a date window at six o'clock for a movement that goes by the name BWC/02. Small seconds are still housed at nine o'clock, and the movement retains the same basic specifications: 4Hz escapement and a 50 hour power reserve.

Aesthetically, the H-4 Hercules adds a 24-hour scale around the rehaut, and embraces an altogether more low-key look than the previous limited editions, with unfussy hands and simple, legible Arabic numerals. The crown is a new design, a subtly ridged design that's more sophisticated than the classic oversized onion crown used on the DH-88 and Wright Flyer.

Speaking of sophistication - or at least, of showiness - the H-4 Hercules marks the first time the brand has produced a watch in platinum. For a company that once said it didn't see the relevance of gold watches, it is a marker of how far it has come as a luxury brand. Both the platinum and rose gold versions come with a warm brown dial, while the steel model has a black dial.

In keeping with previous limited edition projects, the H-4 Hercules contains fragments of the source aircraft in its automatic rotor; here, slivers of wood removed during restoration work.

The H-4 Hercules was an astonishing feat of engineering. It held the record as the aircraft with the largest wingspan until earlier in 2019 when the dual-fuselage Stratolaunch made its debut flight on April 13th. It was also remarkable for its wooden construction, although despite its "Spruce Goose" nickname, it was constructed from birchwood (the Wright Flyer, interestingly enough, actually was made from spruce).

Designed as a cargo plane intended for transatlantic use in WW2, it had a carrying capacity of 68 tonnes, which would have allowed it to lift two Sherman tanks with room to spare. Its production was subject to delays, however, and it was only completed in 1947. It has entered the public consciousness for its vast size - as well as the 97.5m wingspan, it was 24m tall at the tail - and the equally vast ambition showed by Howard Hughes in bringing it to fruition.

Yet by any definition it was a failure; only one plane was ever built, and it flew only once, for a single minute, on the morning of November 2nd, 1947. That was enough to get it its place in history, although whether as Bremont says, it "vindicated... Howard Hughes' vision for the greatest aircraft ever built" is debatable.