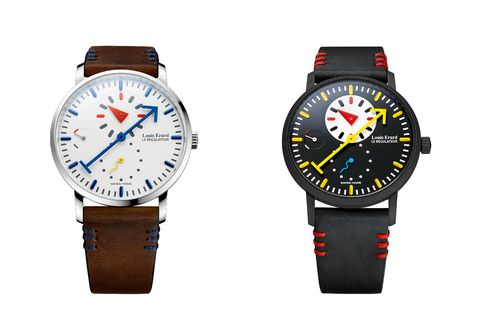 Among followers of independent watchmaking, the name Alain Silberstein is somewhat notable, to say the least. Opening up a business in 1987, he was one of the very first to see that high-grade horology could go hand in hand with an irreverent sense of mischief, a genuinely radical approach to design and a sense that the whole thing didn't have to be taken too seriously.

He ploughed something of a lone furrow for much of the 1990s and while not unsuccessful, there remains the sense that he was a man ahead of his time. His own-brand watches went out of production around 2007 and while they remain highly sought-after by those in the know, Silberstein's presence on the watch circuit has been severely limited ever since. His most prominent work since the financial crash of 2008 has been in collaboration with MB&F - one of the only brands enjoying success with a similarly light-hearted and inventive attitude. The two worked together on a limited edition version of HM2, called the Black Box, in 2009, and again in 2016 on a limited-run version of MB&F's LM1.

Now though, Silberstein has embarked on a new partnership, with Louis Erard: the first fruits of which are the two regulator designs you see here. Louis Erard is a far cry from MB&F in so many ways; the brand is best known for middle-of-the road creations designed to present an alternative, perhaps, for someone looking at a Longines but curious about wearing a less predictable brand name. Design-wise, its regulator is easily the most individual piece in the collection, but no-one had Louis Erard pegged to suddenly step outside of its comfort zone and start working with one of the most vivacious designers of the last 30 years.

The watches themselves are instantly recognisable as Silberstein creations. More so than the work of any other designer, a Silberstein watch is clear at 100 paces: he works with red, blue and yellow in thick, emphatic lines and always looks to employ basic geometric shapes, particularly wide isosceles triangles, arrowheads and what can only be described as "squiggly lines".

The cartoonish, pop-art result is like nothing else on the wrist. In fact, Silberstein's main touchpoint is the Bauhaus school (which celebrates its centenary this year); in particular Paul Klee's emphasis on primary colours and Wassily Kandinsky's fascination with geometry (although Silberstein's work subverts Kandinsky's assertion that the three basic shapes - circle, square, triangle - are most naturally associated with blue, red and yellow respectively).

The 40mm regulator is available in white- and black-dialled versions, with predominantly blue or yellow dial notation for the highest contrast, with red details used more sparingly on both. The triangular hand denotes the hours; the arrowhead the minutes, and the squiggly line the seconds, with a power reserve indicator (42 hours) at nine o'clock. Horologically speaking the watches add little of note - Silberstein was always more concerned with design than complications or in-house movements, and these two models use the same Peseux 7001 base with Louis Erard's regulator module on top.

Excitingly, we hear that this is only the start for the collaboration, and in the next year or so we can expect more LExAS (as it has been dubbed) models.

Each watch is limited to 178 pieces, and priced at CHF2,800 (white) or CHF2,900 (black). Interested buyers are recommended to contact Louis Erard directly.