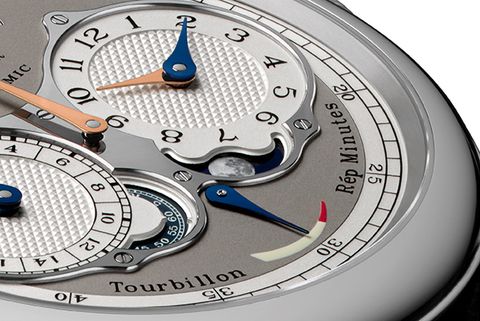 FP Journe has developed a rather intelligent, symbiotic strategy regarding biennial charity watch auction, Only Watch, in recent years.

While the French independent watchmaker donates a unique timepiece to the sale the same as everyone else (the three pieces created since 2015 have all used cases made of Tantalum, a rare, hard metal with a distinct blue/grey tone), the pieces he has donated to the last two sales have been prototypes of forthcoming novelties. This approach not only generates a buzz in the sales room but also for the following launch of the series piece.

In 2017, it worked well for the Split-Second Chronograph Journe created in an alluring mix of blue and bright orange which went on to achieve CHF 1.15m (£900,000) for the auction’s fundraising for research into Duchenne Muscular Dystrophy. This year’s Astronomic Blue mega-complication, flying the same unabashed colours, achieved an even more impressive CHF 1.8m (£1.4m) at auction earlier this month.

Now, not even a fortnight after the auction and with a more refined mid-grey and copper colour scheme (not to mention a case of stainless steel instead of Tantalum), F.P. Journe has revealed the Astronomic Blue’s series-run progeny, the Astronomic Souveraine.

The watch features 18 complications, most of them astronomical in nature, and its solid 18k rose gold movement is comprised of 758 highly decorated components.

To put that into perspective, Patek Philippe’s Grandmaster Chime features 20 complications, Vacheron Constantin’s Les Cabinotiers Celestia Astronomical Grand Complication 3600 features 23 and Franck Muller’s Aeternitas Mega 4 claims 36, 25 of which are visible. Without striding out into the potential minefield that those claims represent, it does put the watch’s complexity into context. It sits comfortably among the grandest of grand complications.

The watch includes a tourbillon with a remontoire system to ensure constant force, a minute repeater, sidereal hours and minutes, 2ndtimezone, moonphase, annual calendar, equation of time, sunrise and sunset, power reserve and natural deadbeat seconds with indications spread over the solid white gold dial and the reverse. It also strikes the hours, minutes and quarters. Rather incredibly, all adjustments are made using the crown.

However, the original concept for the watch came not from Journe, but from his son Charles, who sketched a dial as a teenager in 2004. Charles might have discarded the idea (and the drawing) but his father was inspired by the central curved aperture displaying the path of the sun and spent the intervening years refining the design; first as an automatic, but then as more complications were added a twin barrel, 3Hz manual winder (good for 40 hours) became more appropriate.

Among the ranks of the grand complications it is the most wearable and, dare I say it, most appealing in terms of its design with its uncluttered dial and neat, hobnail sub dials. We could well be wrong, but with most grand complications emphasis certainly seems to fall on including the maximum number of complications with the task of displaying all of that information becoming a follow-up exercise, a horological game of Tetris. Definitely movement ahead of dial. With the Astronomic Souveraine you certainly get the impression that dial came first, which is the Journe’s real triumph here.